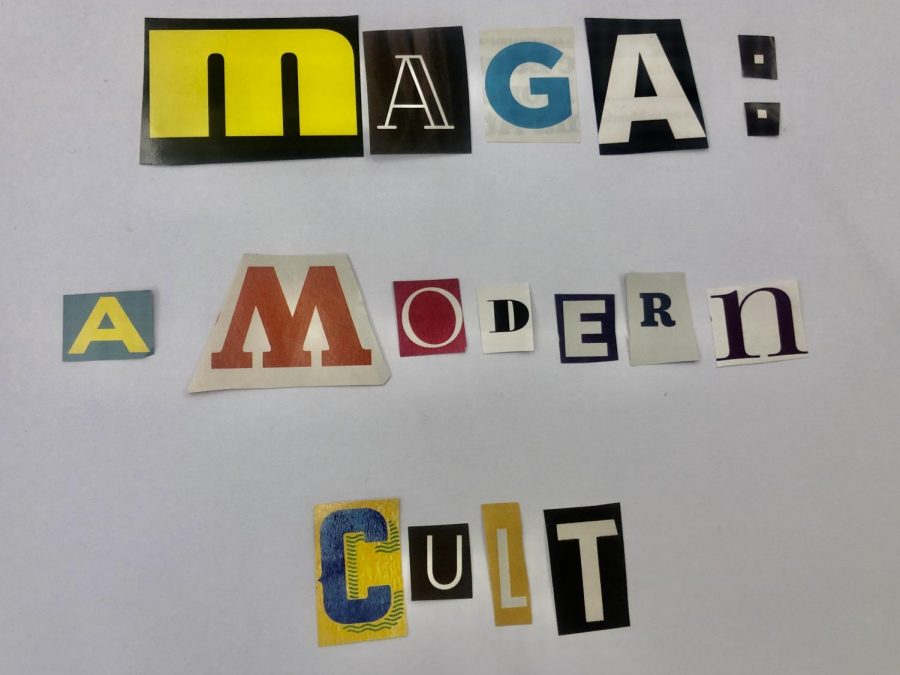 Charles Manson, Marshall Applewhite, Jim Jones: these men defined the word “cult.” Today, the largest cult in America has a different figurehead–the president. Throughout President Donald Trump’s election and term, his powerful words have attracted the attention of many who agree with his beliefs. Actions engaged by President Trump’s “Make America Great Again” (MAGA) movement mirror the building blocks of a cult, which have been categorized into six parts by Dr. Andy Naselli, a professor of systematic theology and the New Testament at Bethlehem College and Seminary. Alongside Dr. Naselli, the International Cult Studies Association (ICSA) recognizes and documents their take on what creates a cult. The indoctrination of the MAGA members follows their three-part formula of creating a cult: the charismatic leader, isolation and exclusivism, and lastly, an antagonistic threat.

The first and most noticeable characteristic of the MAGA movement is the authoritarian leader. In a traditional cult, the leader tends to have an extensive amount of control over the members. A cult’s authoritarian ruler can lead the members into an overzealous relationship towards their figurehead and an overall unquestioning commitment to the leader’s words and actions. President Donald Trump’s supporters and members of his MAGA movement demonstrated said overzealous relationship in a recent November 2019 Monmouth University study. The study found that 62% of President Trump’s supporters said they could not think of “anything that Trump could do, or fail to do, in his term as president that would make [them] disapprove of the job he is doing.” Such undying dedication to the leader is followed by the opposition to independent thinking and self-thought. Dr. Naselli explains the opposition to independent thinking by stating, “some cultic groups discourage members from thinking independently. The “thinking,” as it were, has already been done for them by the cult leadership; the proper response is merely to submit.” MAGA members demonstrated this lack of self-thought when President Trump fooled many of his fans — 237,700+ likes to be exact — with his extremely inaccurate “try to impeach this” map.

Cult members, or MAGA members in this instance, are further indoctrinated through isolation and exclusivism. A common theme among cult leaders is being the sole person who holds “the truth.” Dr. Naselli classifies said characteristic as “exclusivism” in which he states “cults often believe that they alone have the truth. The cult views itself as the single means of salvation on earth; to leave the group is to endanger one’s soul.” The concept of holding the ultimate truth is seen in President Trump’s Twitter tirades. President Trump claimed that liberal media was corrupt and dishonest in a Twitter post on August 18, 2018, stating that “censorship is a very dangerous thing & absolutely impossible to police. If you are weeding out Fake News, there is nothing so fake as CNN & MSNBC, & yet I do not ask that their sick behavior be removed. I get used to it and watch with a grain of salt, or don’t watch at all.”

Tweets and other similar social media posts like this indicate to his followers that he alone has the sole “truth” about what is happening in politics, and opposing party news sources are lying and unreliable. To President Trump’s followers, this sparks outrage in the badmouthing of their leader/president by left-winged media and creates a divide and hatred towards democrats and liberal news sources. President Trump displayed his knowledge of the so-called truth even before he was elected. In another one of his Twitter rants during the 2016 elections, he bashed his opposing candidate, Hillary Clinton stating that “crooked Hillary Clinton and her team ‘were extremely careless in their handling of very sensitive, highly classified information.’ Not fit!” President Trump’s reckless comment of Hillary Clinton sent the message to his followers of a “corruption” coming from Clinton and damages her political image.

Withholding the truth has been a reoccurring theme in cults across the globe, such as the People’s Temple or the Manson Family. The exclusiveness of the cult solely knowing such truth leads to isolation. As seen before, isolation can vary per case; for People’s Temple, it was geographic isolation. For the MAGA movement, it is emotional and social isolation from other functioning members of society. Due to the regional divide in President Trump’s supporters (with the exception of red Republican states and conservative cities), President Trump’s rallies resemble cult gatherings more so than political rallies. In his rallies, he wails about the corruption in America and the need to purify the nation, very closely mimicking the preachings of the People’s Temple cult leader, Jim Jones. An example of this is when President Trump spoke about the corruption immigrants bring into America when he stated in his immigration speech in Phoenix, Arizona, “while there are many illegal immigrants in our country who are good people, many, many, this doesn’t change the fact that most illegal immigrants are lower-skilled workers with less education, who compete directly against vulnerable American workers, and that these illegal workers draw much more out from the system than they can ever possibly payback.” Someone of such power saying such heavy rhetoric, allows their followers to believe that immigrants are corrupting the land of the great.

To create fear and gain a following, cult leaders create an enemy for their members to dwell on and grow hatred towards. Continued in Dr. Naselli’s article, “Six Sociological Characteristics of Cults,” he states that “some cults use fear and intimidation to keep members in line. Members may be told that something awful will happen to them should they choose to leave the group.” Seen in other cults, leaders tend to persecute celebrities, social media, essentially anything in the limelight. For the MAGA movement, they focus on multiple antagonists. From blaming the political activist, Greta Thunberg, or claiming that global warming is a hoax, one scapegoat stands out above the rest: immigrants. President Donald Trump and his anti-immigrant rhetoric has caused division across the country. “When Mexico sends its people, they’re not sending their best. They’re sending people that have a lot of problems, and they’re bringing those problems with us. They’re bringing drugs. They’re bringing crime. They’re rapists. And some, I assume, are good people,” stated President Trump in his presidential announcement speech in June of 2015.

Hateful messages that President Trump has spewed caused massive prejudice and unsettled feelings towards Mexican and other Latinx immigrants. The chaos caused by President Trump creates a divide between ethnicities in the United States. Which, for most cult leaders, this division and the “us-vs-them mentality” is the goal. This hateful message has also caused reckless and unnecessary violence on a smaller scale. Pointing back to the El Paso Walmart shooting, the perpetrator stated that the mass shooting was in response to Mexicans immigrating to the United States. “They are the instigators, not me. I am simply defending my country from cultural and ethnic replacement brought on by an invasion,” stated Crusius when questioned about his motive. This influx of discriminatory remarks has been normalized, and President Trump’s comments may have fueled Crucius’ violent and bigoted thoughts.

Previous cult leaders have pushed their members to do cruel and violent things in the name of their cult. For MAGA, this is no different. Seen with the mass murder/suicide in Jonestown and the murder of Sharon Tate and four others, some of President Trump’s followers mirror this violent path with their hateful words and fatal anti-immigrant shootings. The MAGA movement’s cult-like tendencies are normalized and ignored, but lying beneath the shield of being a “political view” is a very dangerous clique. The bright-red MAGA hats paraded by President Trump’s supporters symbolize the blind faith cult followers often display. His title of the president has protected MAGA from being questioned as a cult. There is a possibility that as President Trump’s term progresses and as he becomes under fire during the impeachment process, his followers will become more extreme, closed-minded, and continue to participate in their cult-like behaviors.