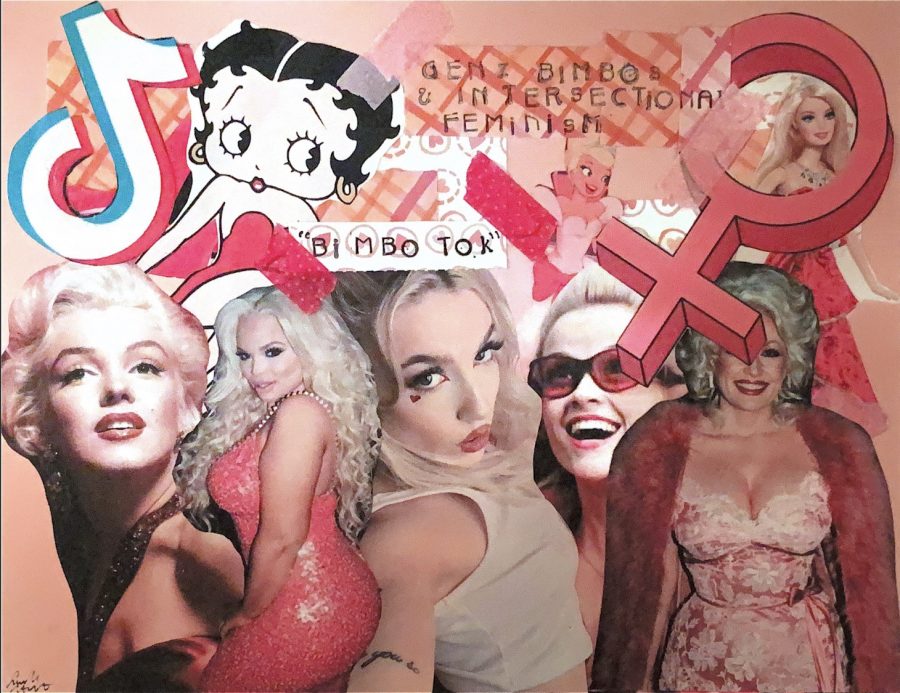 The term “bimbo” has long been a derogatory word coined by tabloids as a sort of misogynistic shorthand to describe an innocuous, vapid, and often stupid young woman who is only concerned with her physical appearance and appealing to the male gaze. In popular culture, bimbos are sexualized and often portrayed to be spray-tanned, blonde, and surgically altered to fit conventional beauty standards.

In contemporary feminism, there has been a split from the traditional female stereotype of wearing makeup, dressing femininely, and being interested in diet culture in efforts to rebel from the male gaze, changing our perception of what a feminist might look like. Most notably, these “feminists” respond to the historical objectification of women by putting down women who act or present themselves femininely, specifically “bimbos” (Think, “You Belong To Me” by Taylor Swift.) In Internet culture, this kind of I’m-not-like-other-girls girl has been dubbed as a “Pick Me,” which is often portrayed as the quirky or relatable teenage girl who puts down other girls, namely “bimbos” due to internalized misogyny. While internalized misogyny is an entire other topic that should be merited its own discussion and research, in short, it is the inherent self-devaluation that is instilled within women at birth by being born into a male dominated patriarchal society.

However, with the emergence of Tik Tok and the prevalence of Generation Z creators on the app, young feminists have reclaimed the title “bimbo” as a new, inclusive label that is an aspirational and even political figure. One of the most prominent creators on “BimboTok,” Chrissy Chlapecka, uploaded a viral video declaring the Gen Z bimbo as a radical leftist woman or non-binary person who is “pro-sex work, pro-Black Lives Matter, pro-LGBTQ+, pro-choice, and will ALWAYS be there for her girls, gays, and theys.”

The ultimate focus of the Gen Z bimbo is to fight the patriarchy and make feminism more inclusive — in other words, making feminism accessible and alleviating the bigoted perception that feminists are boyish and conventionally unattractive. The movement encourages authenticity and supports the idea that one does not need to sacrifice their authentic self in order to uphold feminist values.

In many instances, content produced on BimboTok can also be satirical. Chlapecka says in one of her most famous viral videos, “I don’t do this for the misogynistic male gaze, I do it for my gaze. And damn, [I] look good!” This shows a display of hyper-femininity in order to redefine bimboism; many self-proclaimed bimbos perpetuate the standards posed by the male gaze while firmly making the point that it is in the interest of self-satisfaction and sex-positivity.

A good example of someone who fits the mold of the modern-day bimbo would be Elle Woods from the film Legally Blonde. While ultimately a character who highly values her physical appearance and feminine qualities, in many instances even over intelligence, Elle demonstrates with her ambition and passion that despite her physical appearance and her lack of conformity to the mold of a traditional feminist, she is worthy and capable of recognition and respect from herself and her peers. Ideas such as this coincide with the core values of the bimbo movement that we see online today, in that despite presentation or intelligence level, feminism should be something that is accessible to those who wish to partake in it.

“The bimbo movement isn’t meant to emphasize physical appearance as the only and most vital component to your self-worth, it’s meant to encourage feeling beautiful…just the way you are regardless of what other people think, regardless of what men think,” said Griffin Maxwell Brooks, another prominent creator on BimboTok.

One of the most notable goals of the Gen Z bimbo movement is arguably to make feminism accessible to all women. Traditional feminist theory and texts can be dense and difficult to understand for some, and combined with the fact that feminism is not always accessible to those without solid education, BimboTok creates an informative and inclusive space. With short, 60-second videos that are usually lighthearted and simple, feminist ideals are explored, and important topics such as inclusivity, sexuality, gender identity, and internalized misogyny are discussed.

“The bimbo movement supersedes the male serving beauty standards that we are all forced to live by because there is no aesthetic requirement to being hot,” said Griffin Maxwell Brooks. “You just have to love the way you look, and own it, and stop caring what people think.”