The Preventable Race Against Time 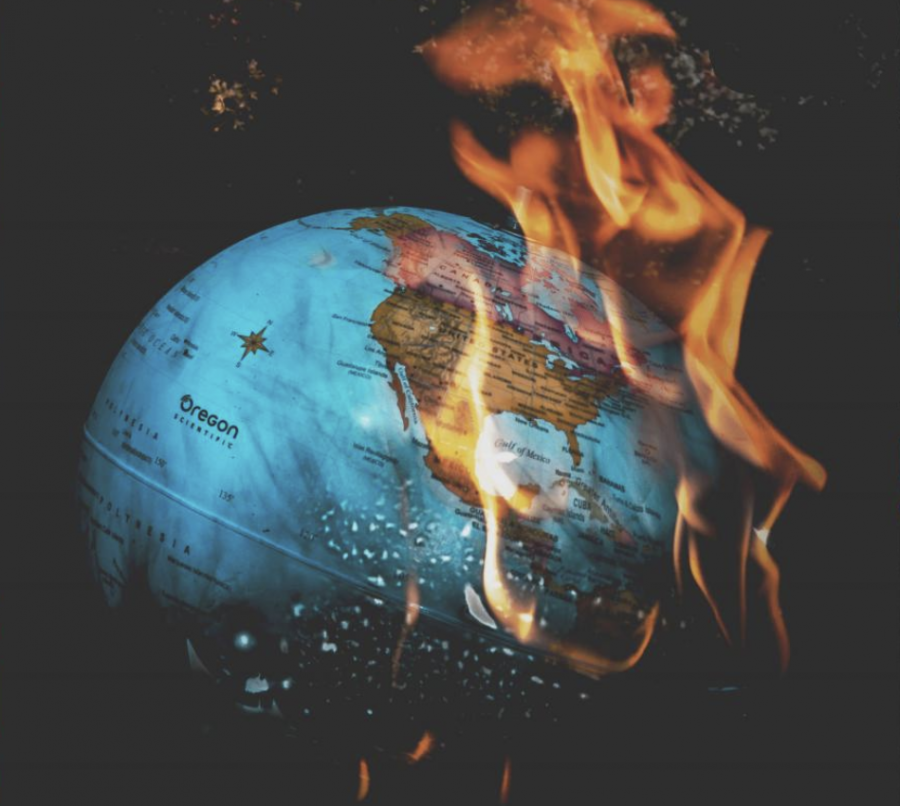 The faint sound of bacon grease popping and crackling on a Sunday morning, a cool breeze from an air conditioner on a warm day, or taking a road trip to Sequoia National Park; without moderation of our resources, these luxuries can have fatal repercussions to both the occupants of the planet and Earth itself. The greenhouse gases humanity produces are not only destroying the planet but driving animal inhabitants to extinction. By performing daily efforts to cut down one’s carbon footprint, it is not only saving the 8.7 million different species of animals on Earth but also the future human generations to come. Commiting to a cleaner lifestyle to help prevent said destruction is simple, but it takes passion and love for the environment to maintain.

Over the 4.5 billion years Earth has existed, the planet’s condition has differed throughout the millennia. Yet in recent years, the well-being of the planet has plummeted due to the “greenhouse effect,” also known more commonly as global warming. The greenhouse effect is the proven theory that Earth’s temperature is slowing rising due to trapped heat in the atmosphere. The United States Environmental Protection Agency (USEPA) explains that the main contributors to the warming of the planet are two main gases: carbon dioxide (CO2) and methane (CH4), making up over 90% of harmful gases in the atmosphere (“A Student’s Guide to Greenhouse Gases”).

Technology and electricity has been normalized to the point that most Californians do not realize the extent their electrical usage has on the planet. Seemingly harmless mistakes such as leaving lights on or overusing fans and air conditioners have bigger effects on the environment than one may believe. According to a 2010 study done by the USEPA on global warming, “the burning of coal, natural gas, and oil for electricity and heat is the largest single source of global greenhouse gas emissions.” The fossil fuels used to produce the non-renewable electricity are the core cause of the slow but alarming temperature rise of planet Earth. Fortunately, there has been progress in use of electricity since 2010. According to NASA’s data on global climate change, in December 2017, carbon dioxide emissions reached a peak of 407 parts per million (“Sources of Greenhouse Gas Emissions”). Of the 407 ppm, 33% (134 ppm) of all carbon dioxide produced comes directly from electrical usage (“Sources of Greenhouse Gas Emissions”). Luckily, cutting down electrical use is a matter of behavioral habits, rather than life-altering choices.

As stated before, the cutting down of one’s electric use relies on daily routines and changes in behavioral habits. In an article written by Brave New Climate titled “Top 10 Ways to Reduce your CO2 Emissions Footprint,” describes that “behaviour change lies at the heart of most individual actions on reducing our individual carbon footprint.” Brave New Climate suggests that “by being sensible about your use household energy use, and making sure your house is well insulated, you can make a huge dent in your CO2 emissions.” Practicing changes such as wearing an extra layer of clothing instead of turning on the heater, opening the window rather than blasting a fan, or shutting off lights when not in use can drastically cut down an individual’s production of greenhouse gases greatly. Brave New Climate also explains that recycling plastics decreases one’s carbon footprint by using less electricity, stating that “the carbon footprint of fixing things is far lower than making them from scratch.” Another eco-friendly routine to implement into daily life is by switching from unsustainable beauty products, to environmentally-friendly brands such as Love, Beauty & Planet and Lush that use recycled plastic or “naked” cosmetics to minimize their effect on the planet.

California’s biggest killer is society’s favorite luxury: cars. Meanwhile, as most American households drive their children to soccer practice or ballet lessons, the emissions from the overuse of motor fuel has melted the 15,000-year-old ice glaciers in Greenland. The USEPA reports that “34% of all CO2 emissions come directly from transportation.” As for California, in 2016, the California Air Resources Board reported that their overuse of unsustainable transportation makes up for 46% of the state’s greenhouse gases (“Carbon Dioxide”). To put in perspective of how severe the car emissions truly are, Car Talk, a global warming awareness blog and podcast, states that “burning one gallon of gas creates 20 pounds of carbon dioxide.” Unfortunately, due to many Californians commuting to work and sitting in Los Angeles traffic for far too long, the state’s production of car emissions has only generated exponential growth. In an interview hosted in 2018 by David R. Baker on California’s gas emissions, UC Berkeley energy economist, Severin Borenstein, stated that California has “not made progress on transportation,” and has “made negative progress.” Although Borenstein acknowledges that the largest source of greenhouse gas emissions comes from transportation, there are many simple methods to cut down the carbon dioxide emissions from vehicles.

Giving up the convenience and immediate satisfaction of day-to-day use of cars is difficult, but a luxury one must compromise with to help save the dying planet. Switching to an electric car is a great way to cutting down one’s CO2 emissions. Not only are they better for the planet, but are relatively cheaper than the average vehicle. Electric vehicles, such as a Tesla Model X or 2018 Ford Focus Electric, have zero tailpipe emissions, producing fewer greenhouse gases and leaving the planet with cleaner air. For Californians, buying an electric car is particularly beneficial. According to MYEV, a website promoting electric vehicles, California has the lowest net electricity, compared to “central U.S. states like Colorado, Kansas and Missouri where fossil-fueled electric plants are most common.” Electric vehicles also use less oil, and according to Canadian news magazine writer, Andrew Leach, “given that the world consumes about 86 million barrels of crude oil per day, it would be easy to conclude [Earth] will run out of oil in 55 years, or sooner if we increase production consumption.”

The second biggest contributor to greenhouse gas is methane. Grossly enough, methane is mainly produced from cattle passing gas. In a New York Times article titled “Your Questions About Food and Climate Change, Answered” Julia Moskin, Brad Plumer, Rebecca Lieberman and Eden Weingart state that the dairy and beef production from cattle accounts for over “14.5 percent of the world’s greenhouse gases each year.” To coincide the negativity of the overpopulation of cattle, Brave New Climate additionally mentions that methane “packs 72 times the punch of CO2 over a 20 year period.” The high demand for beef and dairy increases the amount of methane produced by cattle annually. A study done by the Environmental Defense Fund estimated that the nation’s methane “may be almost 60 percent higher than federal government estimates.” By cutting one’s intake of animal products, it not only generates less of the much-ignored methane, but also uses less fossil fuels, land, and water to produce.

Although many Californians enjoy a juicy burger from In-N-Out, sacrificing the indulgences of one’s food choices impacts greatly on their economical footprint. Switching to only consuming white meats such as chicken or clams, that take less land, water and produce less greenhouse gases, can severely change the effect one has on the planet. In spite of chicken or oysters being cleaner for the environment, EcoWatch, a climate activism and awareness news site, stresses that “there is no such thing as sustainable meat.” As for veganism, the University of Oxford held a study and found that “cutting meat and dairy products from your diet could reduce an individual’s carbon footprint from food by up to 73%.” Even though dairy cheese seems harmless, continued in the same New York Times’ article, the four authors, Julia Moskin, Brad Plumer, Rebecca Lieberman and Eden Weingart, explain that cheeses “such as cheddar or mozzarella, can have a significantly bigger footprint than chicken or pork,” and that “plant-based foods like beans, pulses, grains and soy tend to be the most climate-friendly options of all.” Soy, in particular, is universally eco-friendly. EcoWatch also described soy product’s sustainability by stating that “a pound of beef requires 13 percent more fossil fuel and 15 times more water to produce than a pound of soy.” Buying local produce can impact your footprint extremely. By buying locally grown food, it takes less effort to transport and according to the New York Times, “fruits and vegetables that are shipped by plane can have a surprisingly hefty carbon footprint. During the winter, that may include asparagus or blackberries — produce that’s perishable and needs to move quickly between distant places. By contrast, apples, oranges and bananas are often shipped by sea, which is more fuel-efficient.”

Given in the name “global warming,” Earth is severely overheating. The Conservation Planning Specialist Group (CPSG), a wildlife protection organization, recorded that “2012 was the hottest year on record in the US,” pointing to the severity of the temperature changes. According to the World Wildlife Fund (WWF), air temperatures “have increased by about 5°C over the last 100 years.” The CPSG also described in an article titled “Climate Change & Wildlife,” that in dried out climates “plants and forests suffer from the lack of water,” and that “increased wildfire activity due to hot, dry conditions poses a risk for safety of wildlife;” proving how major the effects of the temperature rise has on every climate. Not only do greenhouse gases change the temperature, but they melt ancient glaciers in the process. Explained by the WWF, “the Earth’s north and south extremities are crucial for regulating our planet’s climate and are particularly vulnerable to the impacts of global warming, which has global consequences.” Rafi Letzter, a writer for Live Science, explains that Greenland, a country located near the northern pole, “lost roughly 631 trillion pounds (286 trillion kilograms) of ice per year,” from 2010 to 2018.

By destroying these ancient habitats so rapidly, the animals occupying said habitats are becoming endangered as well. According to the National Geographic, “coral, polar bears, and frogs are among the species hit hardest.” Due to the specific environments these species need to live in, they are not able to adjust and evolve as rapidly as the climate is changing. Specifically for polar bears, the disappearance of ice not only disrupts their food chain, but reproduction, predatory protection, and ability to travel long distances. Explained in an article published by the National Geographic titled “7 Species Hit Hard by Climate Change,” climate change has forced polar bears “to exploit alternative food sources… and some even have turned to goose eggs.” Although polar bears and other colder-climate animals are facing the most reprobations, the sudden changes in all ecosystems has been extremely devastating to all walks of life. The U.N Intergovernmental Panel on Climate Change (IPCC) explains that “a 1.5°C average rise may put 20-30% of species at risk of extinction,” and that “climate change is happening too quickly for many species to adapt.”

One: the number that haunts humans globally. One planet, one Earth, and one chance to save it. Humans, as a whole, need to take initiative and educate themselves on steps to preserve the sole planet given to them. One can only hope that society will be willing to give up their luxuries of constant electricity, single use transport, and unsustainable food to lessen their environmental impact. We need to take action, and fast, because according to the IPCC and National Oceanic and Atmospheric Administration’s (NOAA) National Climate Assessment, “the world must cut carbon dioxide emissions by at least 45 percent in 12 years to preserve any hope of maintaining a livable planet.” Sustainable living is simpler than it may appear, but small sacrifices such as recycling, taking public transport, or going easy on the electricity can diminish an individual’s greenhouse gases tremendously. Reevaluate your living, and choose cleaner and greener options. Live sustainably and save the planet.