A Taste of the Past 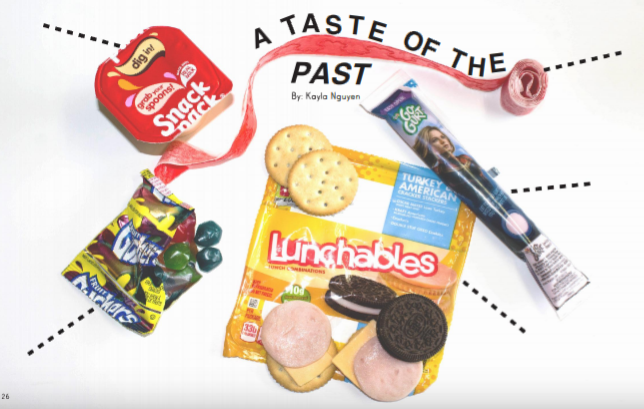 At some point, everyone has recollected their treasured memories of their favorite snacks. A pumpkin latte could make someone reminisce about their festive family dinners. For others it could remind them of a freshly baked pumpkin pie, or a warm, rainy atmosphere that fills a cafe corner.  The rich aroma of melted chocolate might kindle a remembrance of a mother’s heavenly made desserts. In Time, a popular weekly news magazine, Alexandra Sifferlin stated that, ¨the evocation of nostalgia… can obtain a sense of belonging even when the people they are close to are not close by.¨ Nostalgic food swarms people with familiar flashbacks and provokes a feeling of sentimentality.

Nostalgia can be aroused in numerous ways, varying from an abundance of triggers; however, the most common would be the sense of smell. Through psychological research, Howard Eichenbaum, an American psychologist, elucidated “that when we smell something, it enters the nose and then travels through the olfactory bulb.” An olfactory bulb is a sensory structure that is accountable for our sense of smell, also referred to as olfaction. Scent plays a major role in stimulating emotional reactions and in general, food nostalgia.

Eating is a societal norm that helps people bond and establish memorable moments from their time together. Moreover, food speaks to all our five senses, and this makes our memories so much more precious to us because we have a piece of it to hold onto. These random flashes from the past stem from our younger years, providing a taste of home.

The emotions people feel seem just as simple as the foods they eat, but it embraces a much stronger meaning than they know. The memories they experience are important in that it “[has] an enormous impact on how [their] identities are shaped,” as said by Nini den Braber in her article “How Our Memories Shape Us- Our Identities and Culture¨ on her blog Memory Changer. Furthermore, Braber asserts that “Many issues in [their] lives are memory related for it permeates every aspect of our living and civilization as a whole.” This being said, no matter what unwanted situations have happened or joyous moments that have taken place, these instances sculpted them into who they have grown to be. Their memories are the core of their growth as a human being, and with these foods, it’s an important benefactor that connects to what made them happy or upset in the past and how it affects what they’ve felt today if gotten the chance. Everyone should notice the importance of holding onto their memories like a book, staying open, but eventually running out of pages as time passes. Here are some beloved nostalgic snacks that you may remember:

YoGos– These sweet, yogurt-covered bits were welcomed by everybody in the 2000’s. Kellogg’s YoGos are fruity-filled dots glazed with a creamy yogurt coating. The company has a diversity of flavors, varying from Strawberry Slam, Crazy Berries, Berry Berry Banana, and many more. Unfortunately, on Change.org, a petition website, Justin Dickinson, a YoGos supporter, received the confirmation of YoGos discontinuation in 2017. Dickinson explained that “they did not have enough fans.” For this reason, YoGos were taken off the shelves, leaving people in despair.
Trix Yogurt– A Huntington Beach High School senior student was asked “what comes to mind when you think of your favorite childhood snack?¨ The student immediately responded excitedly with “Silly rabbit, Trix are for kids!” However, are they really “just for kids?” That is to say, who would turn down a colorful looking yogurt cup brimming with a rainbow overload? Evolving from their classics, the creators, General Mills Yoplait, formulated new collections of flavors such as: Strawberry Punch, Watermelon Burst, Raspberry Rainbow, Cotton Candy, and plenty more to choose from.
Gushers-Gushers were one of the most popular snacks in the 2000’s; some kids would be begging their friends for just one. Gushers are small, extravagant drops of deliciousness that are jammed with fruit juice, bursting with fruity nectar in every bite. Gushers entered the snack world in 1991 and were released to the public with their two original flavors, Gushin’ Grape and Strawberry Splash. From Snack History, they informed that Gushers were shaped as an “elongated hexagonal bi-pyramid,” and people grew fond of its strange shape. Gushers were predominantly marketed for kids to eat, but when the adult panel from Sun Sentinel, a daily newspaper of Florida, performed a taste test for the treat, they grew to enjoy the sugary snack as much as the kids did. To this day, Gushers can still be located in local grocery stores such as Albertsons, Target, and Ralph’s.
Hunt’s Snack Pack– Hunt’s Snack Pack was launched in 1968, with a horse named Snack Pack as its mascot. This custard-like treat was similar to a dessert for children at school. Snack Packs were a convenient delight for students, filled with a luscious milk pudding. Back in the 70’s through the 80’s, the old edition of Snack Packs was sold in cans, now, they are packaged in a 3-4 ounce plastic cup and sealed with a metallic lid. Hunt’s Snack Packs are not as popular as before, but they can still be found in stores.
Fruit by the Foot– Kids of all ages were addicted to the fruity tanginess of General Mill’s popular product, Fruit by the Foot. Thirty-six inches of candy are packed into rolls, suitable for children to eat. This playful snack could be eaten in numerous ways; some peel it off the paper and eat it as a long rope. Others eat it as the paper strips off, or even split the fun design and then devour it. This sugar-strand is a favorite among kids, and is still enjoyed by many today.
Gripz– Keebler’s Gripz were the snack the party person always brought to the house. This treat came in value packs, consisting of three popular snacks: Cheez-it, Chips Deluxe, and Keebler´s Grahams Crackers. These were suitable amidst students because of its quirky element—they came in miniature sizes! These morsel-sized delights were easy to pop into mouths during break, were kid-friendly, and intrigued kids by its minuscule shape. No wonder this was a salable product in the school community. Sadly, it lost its spark and isn’t eaten as much as it used to be.
Lunchables– Lunchables are the next best thing in school. They come in a plastic box that is divided into small sections. The fancy bento box design made it seem like a legitimate lunch. According to Nick O’Malley on MassLive, he wrote that “Lunchables are more than just lunch. They’re cafeteria ammunition in the battle of ‘Who has the coolest lunch?’ ” The menu for lunchables consists of dishes like nacho cheese dip and salsa, turkey and cheddar with crackers, pizza with pepperoni, and chicken dunks. Now, they have upgraded to new lunch items such as Lunchables Snacks, Lunchables Uploaded With Drink, and even Lunchables Organic.