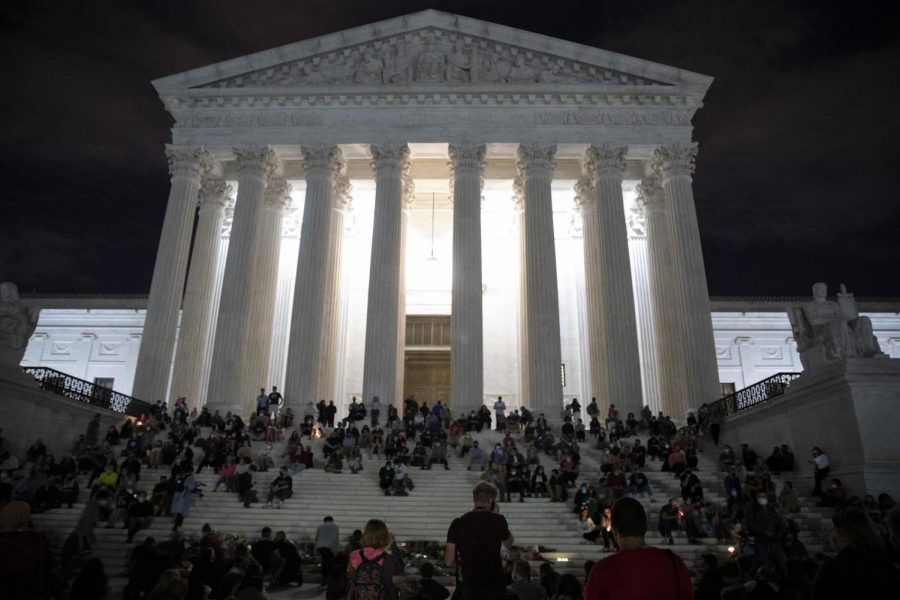 Ruth Bader Ginsburg was a Supreme Court Justice who worked to improve the lives of others when nobody else could. She was monumental beyond compare, and her influence shaped a new type of life for women as well as men. Her consistency and tenacity were proven in her academic achievements, carrying her far in her career. “You can’t have it all, all at once,” Ginsburg said. She served as an inspiration and gave hope to those in their hardest times. Although her eighty-seven years of persistent devotion both in and out of the Supreme Court concluded on September 18, 2020, when she passed away from cancer complications, her memory will never fade. She will always remain an extremely important woman in United States history.

Her passing instilled sadness in the United States, and from there, citizens demonstrated their empathy through signs, flowers, and artwork. “The Notorious RBG,” as many called her, demonstrated that through any situation, if you want to do something, you can.

Those who met Ruth Bader Ginsburg before her life achievements knew her as the high school cheerleader, “Kiki Bader.” During this time, Ginsburg had abided by a traditional female role within stereotypical social expectations because she wanted to. She wrote her own story, regardless of what people told her to do.

She later received a bachelor of arts degree in government at Cornell University and then was accepted into Harvard Law School. She transferred to Columbia Law School when her husband, Martin D. Ginsburg, took a job in New York City. Martin was one of Ruth’s biggest supporters, as they both valued each other’s work as much as they valued their marriage. Both Ginsburgs sadly died of cancer, but they got the chance to positively and significantly influence each other during the time they had together.

Her most prominent contributions were through her Supreme Court votes and advocacy, yet, before her inauguration, she exemplified her political power as well. She earned herself the spot as the second female ever on the appraised bench and proved her worth for twenty-seven years. Ginsburg wrote the majority opinion of the Olmstead v. L.C. 1999 case where two women had to unjustifiably adhere to Georgia’s mental institution in isolation even after treatment, breaking the “integration mandate” in the Americans with Disabilities Act (ADA). “[The] unjustified isolation [of Curtis and Wilson] perpetuates assumptions that persons so isolated are incapable or unworthy of participating in community life,” she said. She turned the unsettling case 6-3, and her support for individuals with perpetual mental suffering persuaded the case, giving them the win they needed.

She also proudly held a front in the ACLU Women’s Rights Project. The litigation was run by Ginsburg with co-founder, Brenda Feigen, at her side. At this same point, not only was she offered the position of the founder of the American Civil Liberties Union’s Women’s Rights Project, but she was also offered a position to become the first female on the tenured Columbia Law Staff. In Ruth’s luck, Aryeh Neier, the ACLU Executive Director, knew Michael Sovern, the president of Columbia University, and they agreed to let her lead to both positions. She could both be a professor and part of the Women’s Rights Project, as she deservingly earned.

“She had a really radical project to erase the functional difference between men and women in society. She wanted to make clear that there should be no such thing as women’s work and men’s work,” said former Supreme Court Correspondent for the New York Times, Linda Greenhouse.

Gender equality was interpreted as a radical idea to some people, but for RBG, it was a fundamental right. Men often disregarded the gratitude they should have had for her, as they believed she was only a women’s rights activist, but limitations relating to both sexes were never tolerated by RBG. Within the ACLU, she represented Stephen Wiesenfeld’s case, a man whose wife passed away during childbirth. Stephan hoped to stay home to care for his child, but only widows, not widowers, were entitled to Social Security payment support. Ruth’s argument advocated on Stephan’s behalf that governmental assumptions of what roles men and women can and cannot do in their lives are unjustifiable and unconstitutional, and she won the case. Many forget that she truly wanted the best outcome for both women and men who were discriminated against and made vital changes in the path for gender neutrality.

“I pray that I may be all that she would have been had she lived in an age when women could aspire and achieve and daughters are cherished as much as sons, “ Ginsburg said during the press conference in 1993 for the Supreme Court nomination, announcing her as the newly appointed justice. Her mother gave her all the drive and motivation that she needed, and Ruth hoped to achieve all the things her mom was not able to. Without some of Ruth Bader Ginsburg’s contributions and fierce arguments, the kick-start of gender equality and different types of representation would never have been introduced.

Ruth Bader Ginsburg will forever hold a place in history and should be remembered with the accomplishment of making the world a better place. She changed the course of our lives, and the proper memorialization of Ruth Bader Ginsburg is the least we can do in return.