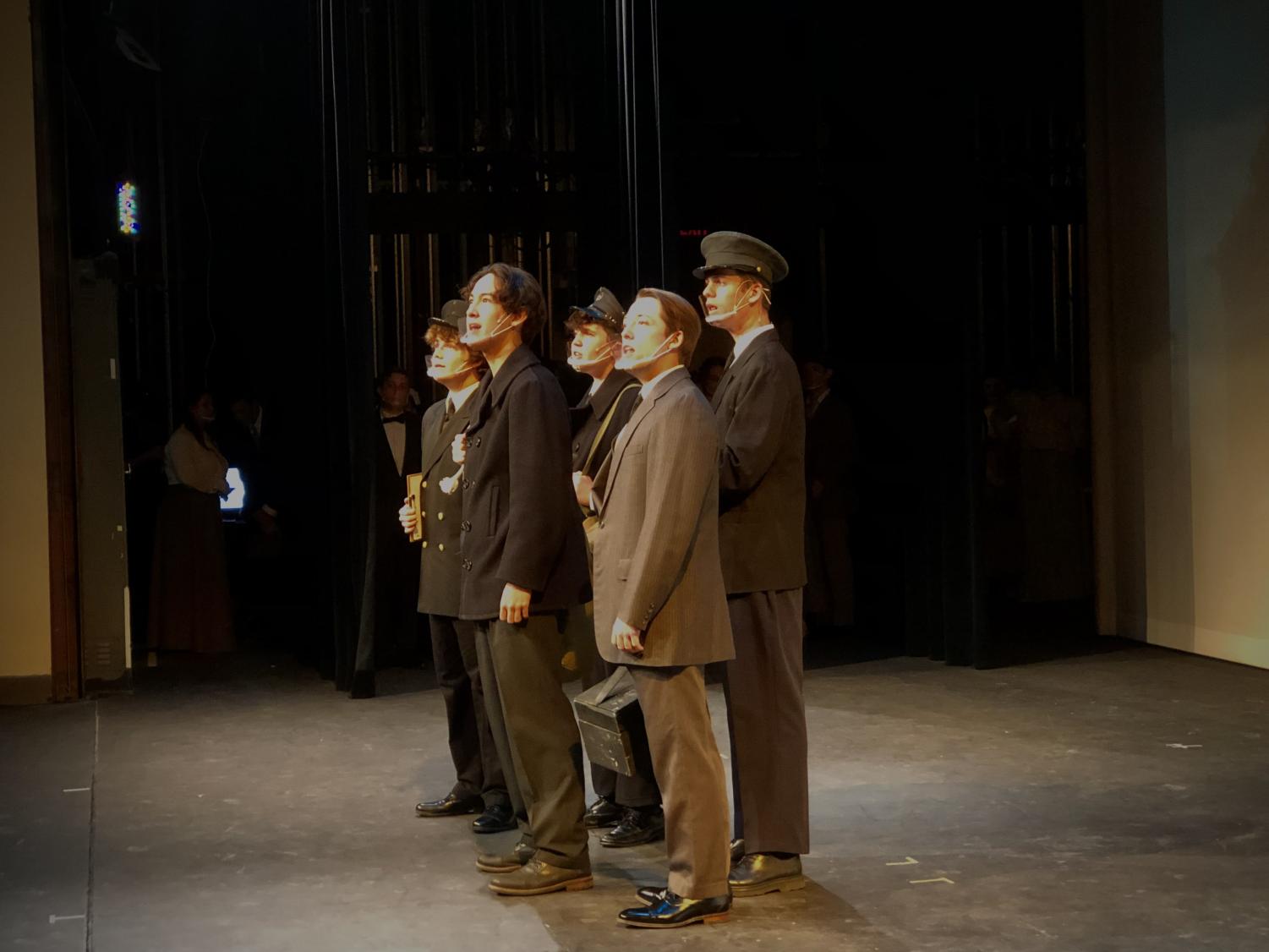 An Unsinkable Show: A Look Behind the Scenes Of Titanic the Musical

The Huntington Beach Academy for the Performing Arts (HB APA) program at Huntington Beach High School was shut down for almost a whole year during the height of the COVID-19 pandemic. However, due to the lift on the CDC restrictions, the musical theater program has finally come back to perform on stage this year.

“The only thing that’s different now is that we have to wear protective face shields,” said Natalie Bains, a junior musical theater major in APA.

The inability to perform last year was difficult for many, and in Bains’s case it made her “feel more disconnected from other people in [her] class,” so when Titanic was announced for the first time, all the students were excited to get back on the stage and be close together again while building bonds with their classmates. The sophomore musical theater class has not even had a chance to do a normal show with APA; Titanic is the closest to an “ordinary” show that they have ever taken part in the program.

Refloating the Routine: Rehearsals and Working to Make the Show

Multiple cast members discussed what it was like to put together such a complex show for the first time in a year with only five weeks to rehearse. Most cast members explained how difficult it had been but how the show turned out well in the end.

“It was difficult,” said freshman Evan DiCarlo. “But it being my first musical,I had no expectations.” DiCarlo felt that the musical went smoothly, but other students who were familiar with the regular expectations–being able to make contact and no masks– described Titanic schedules as chaotic and last-minute. Some said it was a scramble with a large amount of complex material and limited time.

“I believe our cast was very capable of learning the music, and I was very surprised with how quickly we picked up the intricate harmonies,” APA senior Lily Horns said. “I did not doubt that by the opening week we would be set.”

The cast was confident in themselves and their director to put on an amazing show, even if the environment became stressful. They’re all happy to finally get “back to a new normal show,¨ with the progress in COVID safety.

While the rehearsal schedule for the actors was about five weeks, the technical crew, better known as the “techies,” built all sets and made all the props two weeks before the musical’s opening. During tech week–when the crew built and assembled necessary props –Sophia Pollachi, the props master for this production, said that “[tech week] is a really fun and stressful experience, with so much happening at once. It has been great to finally see the show come together onstage.”

Most notably, the techies had to create one of the most difficult sets that any of them had ever had to build before the sinking ship. Marcella Gigliello, who ran spotlights for the show, explained how the ship works.

“[T]he ship is essentially a giant seesaw, ” they said. “Once the staircase on [the] left side is removed, the run crew pushes down on the [right] side causing the ship to tilt, and the actors to fall off the sinking ship.”

According to Sophia, it has been a struggle for the techies to get the show ready by opening night. She adds that “especially because of the sinking ship, it has been a learning curve to figure out how to build it [in addition to] all the other sets and props.”

While the show was difficult to put together, it was rewarding for the tech crew to see the show come together onstage. “It’s fun to see [the sets] get used and enjoyed and [it is enjoyable] to see the magic that we created come to life,” said the sophomore run crew member, Echo Stamper.

This was Echo´s first show teching post-COVID for APA. He said they had a great time, even though “it was hard making sure that [everything that] looked good also worked well.”

The majority of the students in the show described “being consumed by stress” during tech week. APA sophomore Sam Borenstein says that the start of tech week “begins to apply all aspects of the show, whereas before it was just our scenes and songs. With the entire [show being put together during] tech, it’s reapplying everything we’ve learned, learning whole new aspects a week before the show, and of course stopping every minute to fix things. [It] can get stressful.” The aspects of the show are the most important part of tech week because it finally puts the show together and makes it perfect.

The schedule is spread out for everyone in the cast, and once tech starts, the entire cast is called at the same time for up to five hours at a time. Peyton Moore, a musical theater senior who played Alice Beane, said that tech week usually involves “[rushing] to finish what we haven’t had time to learn and [running] the show as realistically as possible so that we won’t be [performing] anything [fully] for the first time when the show opens.”

“After tech week hits, that’s when the cast realizes how much work has to be done to finalize the show,” said Lily Horns. Tech week is a stressful time for all the actors, it’s still a fun environment and everyone helps each other to keep up on school work and support each other during the long hours.

In 2009, Titanic the Musical was APA’s spring show. Kyle Selig, who now performs professionally on Broadway, was in the cast as Frederick Barrett, a stoker on the Titanic. A student teacher for musical theater and past APA student, Garrett Brown was also in the cast, along with our own Tim Nelson as the director. Repeating shows that were done before, especially by such talented actors, can make some of the cast nervous to live up to past performances.

“It is stressful because you want to live up to the expectations that the previous cast left,” said Macaila Dorney, a sophomore in the Musical Theater department.

The shows are one of the most anticipated parts of the musical theater program, and Titanic was already stressful to adapt to the stage, even though it is an APA repeat.

“We’ve repeated shows before, so it doesn’t bring any new experiences, but I think we all want to do a better job the second time around,” said Peyton Moore.

After the 2009 show, unfortunately, most of the sets were scrapped, which meant the tech crew had to make most of the sets from scratch. It was stressful for them to have to meet the specific and standard needs of the previous sets, giving them less creative freedom because of the particular requests from the director, Mr. Nelson, for the blocking of the show. Some also saw it as a chance for the audience and director to see the sets done differently; in the end, the sets were slightly varied from the 2009 adaptation due to the recent retirement of the previous head of the Technical Theater Department, Joe Batte. While his version was beautiful, the sets this time around were more suited to the director’s requests and were pleasing for all the actors once they were finished.

When the show opened, everything went smoothly; all issues from tech week worked out on all ends. The start of tech week was a realization for the cast that the show was finally happening, and they needed to be able to get the show perfect before they opened.

“It’s not until you start the show on the first day of tech, and everyone’s out in their costumes, and it’s like this instant realization..‘oh yeah, we’re putting on a show,’” said Peyton. Audience members all enjoyed the show and the story and knew the actors brought the story to life perfectly.

The cast had the great feeling of knowing that their performance was incredible, and they have all expressed excitement to perform onstage again. Many of the cast and crew expressed that they can not wait for the winter black box show, Cabaret.