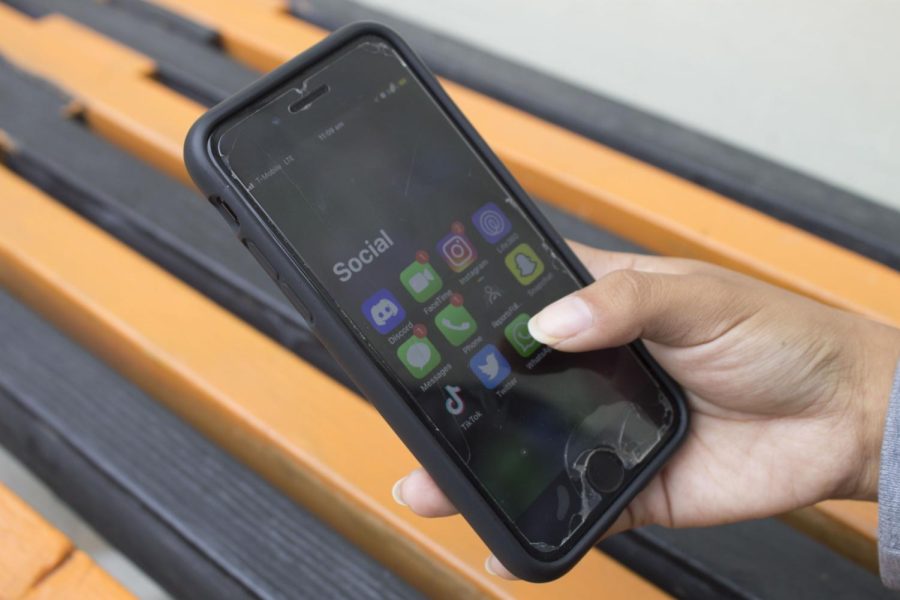 Belinda Miguel, a student at huntington beach highschool, about to open up social media. (Photographed by Hayley Durrant)

Kids Should Not Have Social Media

Social media has become a huge part of children and teen lifestyles in recent years. Social media has helped children develop communication skills, spread ideas, and allowed them to make friends online. However, social media is also very detrimental to the livelihood of our generation.

To start, on average, children from ages 8-12 spend around 6 hours a day on social media. Because children spend a lot of time on social media, many fall through the dark hole of disturbing content and cyberbullying. Not only do children come across this type of content, but they are also more prone to spread private information. Due to them being easier to manipulate, they are unaware of the dangerous effects that come from spreading private information and the consequences that may follow. In addition social media, also affects children’s lifestyles from the way they dress to the way they judge themselves, often resulting in a negative outcome on their mental health.

Growing up with the constant influence of social media, children have revolved their lives around the image they put out due to the high standards social media presents. Many children have been forced to grow up and because of this change the clothes they wear, the way they look, their views and judgments, and their lifestyle as a whole. Children’s brains are still developing and many of them do not know the future effects of being forced to grow up.

This pressure of having a “perfect” life affects children’s lifestyles and ultimately ruins their childhood as they are constantly focused on how many likes or followers they have.

Not only do children compare themselves to other people on social media, but they are also more prone to cyberbullying. Many people throughout their lives have experienced bullying, but even more, have experienced cyberbullying. Social media is an easy way to spread rumors and judge one another. “Being behind a screen makes it easier for one to say things they wouldn’t say to one’s face” says Tyler Durrant, a student at Huntington Beach High School.

Ultimately kids should spend time with their friends, family, or outside, instead of going on social media as they should not need to worry about how they appeal towards others or have the pressure of having a perfect life. One isn’t a kid for long and instead of trying to grow up fast by revolving their childhood around social media, kids should enjoy it because as they get older regret will undoubtedly follow.