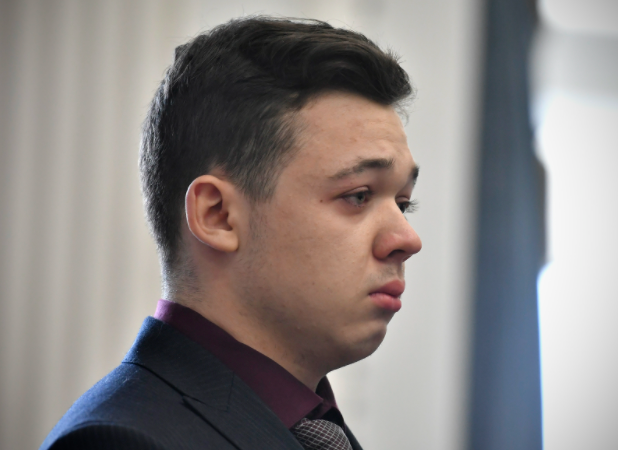 “Kyle Rittenhouse reacts as he is found not guilty on all counts at the Kenosha County Courthouse on Nov. 19, 2021, in Kenosha, Wisconsin. Rittenhouse was found not guilty of all charges in the shooting of three demonstrators, killing two of them, during a night of unrest that erupted in Kenosha after a police officer shot Jacob Blake seven times in the back while being arrested in August 2020. Rittenhouse, from Antioch, Illinois, claimed self-defense who at the time of the shooting was armed with an assault rifle.” Photography by: Sean Krajacic/Pool/Getty Images/TNS

“Kyle Rittenhouse reacts as he is found not guilty on all counts at the Kenosha County Courthouse on Nov. 19, 2021, in Kenosha, Wisconsin. Rittenhouse was found not guilty of all charges in the shooting of three demonstrators, killing two of them, during a night of unrest that erupted in Kenosha after a police officer shot Jacob Blake seven times in the back while being arrested in August 2020. Rittenhouse, from Antioch, Illinois, claimed self-defense who at the time of the shooting was armed with an assault rifle.” Photography by: Sean Krajacic/Pool/Getty Images/TNS

How Could This Have Happened?

Last week, Kyle Rittenhouse, an 18-year-old from Antioch, IL, was cleared of two counts of first-degree homicide, charges of reckless endangerment, and possession of a weapon at 17 years old. In late August of 2020, Rittenhouse killed Joseph Rosenbaum (aged 36) and Anthony Huber (aged 26) and injured Gaige Grosskreutz (at the time of the shootings, aged 26) at a Black Lives Matter march for justice for Jacob Blake.

Rittenhouse had crossed state lines with an AR-15 rifle and attended the protest at Kenosha in Wisconsin, originally intending to “aid” an armed militia/vigilante group that was mobilizing against protestors. Rittenhouse had argued that he was acting in self-defense. Rosenbaum and Huber were unarmed; reports say that Rosenbaum attacked Rittenhouse with his skateboard in attempts to disarm him and Huber threw a plastic bag at Rittenhouse.

A day after the shootings, Rittenhouse was arrested at his home in Antioch. Notably, he received national media attention and was particularly favored by Republican and far-right conservatives in his endeavors. Gofundmes were set up, and with the help of several conservative brands and public figures (including the likes of Mike Lindell, My Pillow Guy, and Ricky Schroeder), Rittenhouse made $2 million in bail bonds.

By November 1st, 2021, jury members were selected for Rittenhouse’s trial in Kenosha. By Tuesday and Wednesday, November 16th and 17th, deliberations had begun. Pleading not guilty, Rittenhouse had taken to the stand and broken down crying as he described the moments before he had shot and killed his victims.

After being cleared of all charges, Rittenhouse met former President Donald Trump. Trump told Fox News that he thought Rittenhouse was “really a nice young man.”

Ultimately, the details of the trial do not matter so much as what the trial delineates about American society. If Kyle Rittenhouse had not been white, the results would have been starkly different.

Rittenhouse has been proven to hold ties to American white supremacist groups. If holding the support of Donald Trump was not enough proof, in January 2021, Rittenhouse was seen in a bar in Mount Pleasant, WI, flashing the “OK” sign with his hand — “a gesture that has been co-opted by known white supremacist groups” according to NBC News. In the same bar, Rittenhouse was seen participating in singing the anthem of the Proud Boys.

If anything, the conclusion of the Rittenhouse trial demonstrates that American society exclusively caters to white Americans. The United States judicial system, a system that should not have a bias, is sympathetic to the “plights” of white offenders — meaning white people are less likely to be convicted of crimes, more likely to have the police on their side (regardless of their crime) and more likely to become a martyr (as was the case of Rittenhouse).

But we already knew this.

Take Crystul Kizer, a woman of color who was also arrested in Kenosha, WI. Like Rittenhouse, she was 17 when she was arrested for shooting and killing her abuser, who had allegedly held her captive, mentally and sexually abusing her. Both teenagers pleaded self-defense, and both went to trial in Kenosha. The difference is that today, one is currently incarcerated and the other is a guest at Mr. Trump’s golf course.

The white agenda is inherently racist, and it perpetually attempts to break down any sort of progress that we as an American society make towards racial justice and equality. That statement is arguably a fact. Kyle Rittenhouse, in many ways, is a victim of the American way of life. He is a culmination of the state of American society and the media as we know it.

One thing must be clear: Kyle Rittenhouse is a homegrown terrorist, though perhaps to no fault of his own. He is still, in many ways, just a teenager. His nearly having a panic attack on the stand in his trial is evidence enough.

“To his supporters, and even many of his detractors, Rittenhouse isn’t a monster,” says Issac Bailey, professor at Davidson College in an essay for NBC. “Not really. He was a young, dumb kid hyped up on the Foxification or Fox News effect of American discourse on the Black Lives Matter movement…He wore no hoods and didn’t wrap himself in the Confederate flag. He’s a patriot who tried to bring calm to chaos because, as Fox News prime-time host Tucker Carlson told us at the time of the shooting, the adults around him wouldn’t “maintain order.” He was so nonviolent that police officers greeted him and those like him like fellow guardians of the community before he killed anyone.”

Obviously, Bailey takes a more satirical stance on the Rittenhouse situation — but his words hold up. In a digital age of mass polarization within American media, the pipeline from conservatism to radical extremism is less of a slippery slope than it is a cliff with a vertical drop.

In a study completed by Olivia Little and Abbie Richards via Media Matters, it was found that based on how the algorithm works on a site such as Tik Tok, an average account can go from casually interacting with videos exhibiting intolerance (in the experiment, Little and Richards solely used transphobia) to constantly being shown videos that actively seek to radicalize and encourage terrorism.

Ultimately, the study concluded with the following takeaways: Firstly, interacting with transphobic content led to the experimental account’s FYP being populated with more videos of the same content. Secondly, interaction with transphobic content resulted in the recommendation of content that was racist, sexist, homophobic, antisemitic, ableist, propagated with hate speech and symbols, etc. So, it is a viable hypothesis that if a user engaged in any one of those topics on Tik Tok, they would be recommended content in any or all of the other topics listed.

Lastly, the study states, “Of the 360 total recommended videos included in our analysis, 103 contained anti-trans and/or homophobic narratives, 42 were misogynistic, 29 contained racist narratives or white supremacist messaging, and 14 endorsed violence.”

The Department of Homeland Security highlighted “the need to support and protect our most vulnerable populations, our youth in particular” when it came to counter-terrorism measures in the United States. Despite this, and despite the actions of figures such Rittenhouse, little has actually been done to support their statement.

From August 2019 to February 2021, seventeen American teenagers, ages ranging from 14 to 18 years were arrested with terrorism-related charges, according to the Guardian. Kids on the Internet are most vulnerable and most likely to be influenced by what they see online. But they are also influenced by the adults they see on television, in their communities, and in the White House or Capitol building.

If the Rittenhouse verdict says anything, it highlights a need for action and investigation into the pipeline of radical extremism and how it is perpetuated by American culture. Rittenhouse and the trial itself are not the problem; the problem is the answer to the question, “How could this have happened?” The events of Rittenhouse’s crimes and verdict of his trial are proof of the deteriorating state of our society; polarization has trumped justice.