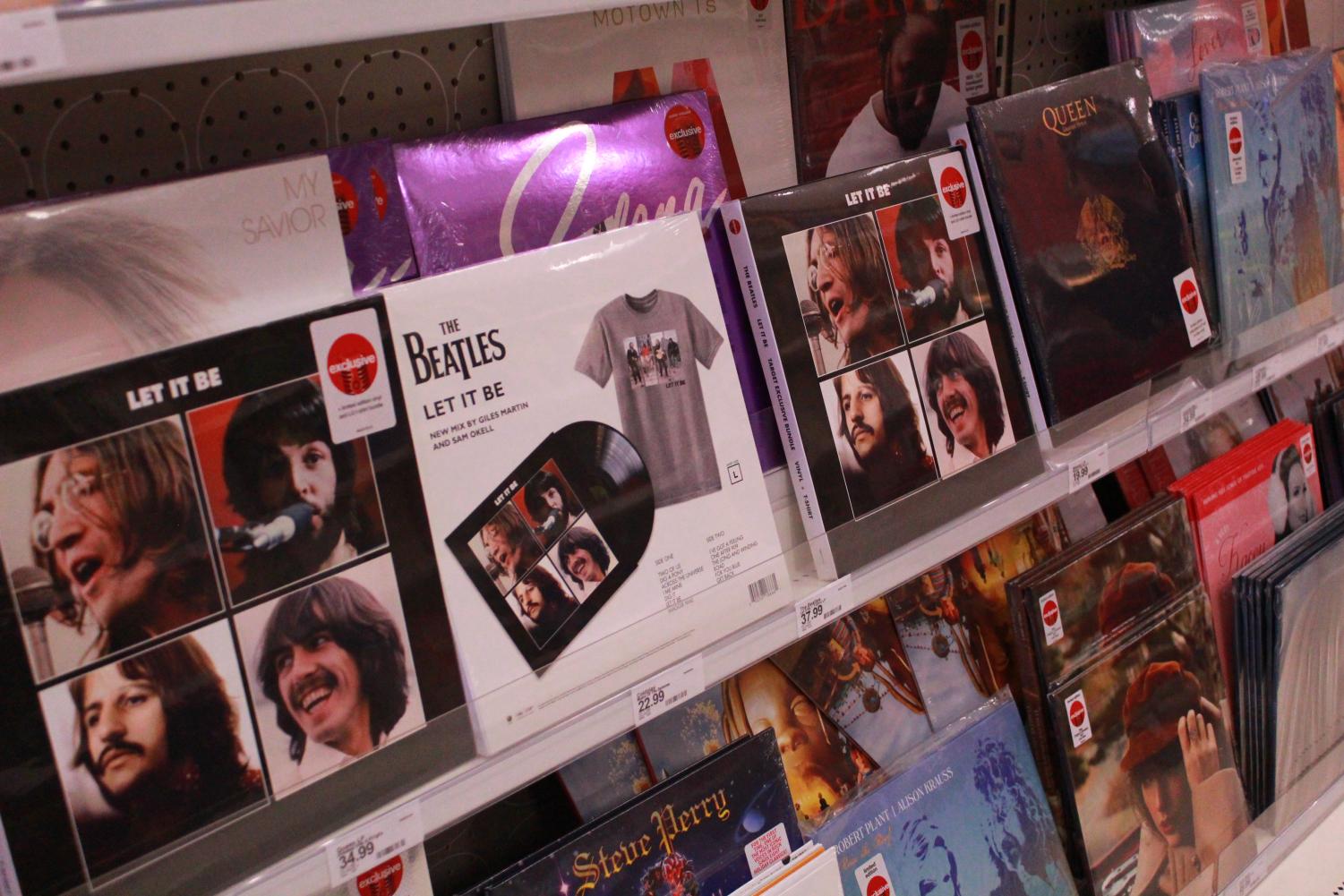 A series of Beatles albums lined up on display in a store. (Photography by: Rylee Bakx)

A series of Beatles albums lined up on display in a store.

Do The Beatles Deserve to be Classified as Rock?

The Beatles were an English Liverpool-based band comprised of four musicians: rhythm guitarist John Lennon, bass player Paul McCartney, drummer Ringo Starr, and lead guitarist George Harrison. Since the height of their popularity in the 1960s, The Beatles have been cherished by society and people have often claimed that they invented modern music. The band’s music is widely considered to be categorized as rock with elements of classical music and traditional pop; their albums have influenced the way people make music today. The Beatles may have brought a new sound to contemporary music, but can they truly be considered a rock band?

Since The Beatles’ influence makes them a legendary band in our society, people often compare them to other bands that have been held to similarly high standards. One band that is often compared to The Beatles is Queen. While Queen’s first album was released in 1973 and The Beatles’ final album was released in 1970, the two bands are often compared due to the level of fame and standards both bands are held to. Both bands are classified as rock, however, only one of these English bands is truly rock, and Queen holds that title.

Queen is categorized as classic rock and has some songs that may seem similar to that of The Beatles, yet their operatic vocal style mixed with the rock accompaniments keeps their music interesting and easy to enjoy. Two songs that are the perfect example of how Queen is rock and The Beatles are not are “Bicycle Race” and “Yellow Submarine.” These songs both showcase the more playful side of these bands, however, there are a few key things that separate them and show the difference between the bands. “Bicycle Race” is just as upbeat as “Yellow Submarine” but stays true to the rock tempo and chord progressions that are used in most of Queen’s music. “Yellow Submarine” also has a decent beat, and a very catchy tune, however, it is much mellower than “Bicycle Race,” even though the two songs are classified as the same genre. “Yellow Submarine” is also very monotone and repetitive, whereas “Bicycle Race” uses more vocal riffs and expressions that give off a deeper rock sound.

Another band that is compared to The Beatles because of the time era and the level of fame both bands have is the Rolling Stones. The Stones were popular during the same era as The Beatles is The Rolling Stones. Also rising to fame in the 60s, The Rolling Stones are one of the most well-known rock bands to ever produce music, however, they are arguably not as well known as The Beatles; rock lovers, such as myself, may see this as an issue. Both bands have a softer tone in their songs, but while The Beatles continue to keep that airy and sweet tone, the Stones use many different sounds in their wide array of music and, much like Queen, begin to step up the tempo and the intensity of the instruments, showing off the true rock roots behind their music.

Now, it would be unfair to say all of The Beatles’ songs are bad because that is simply not true. They have released songs that have become classics that many people adore, such as “Here Comes the Sun,” which is a very well-crafted song. When listening to The Beatles though, it can become easy to forget what you’re listening to because most of their songs all sound the same due to their light and airy tone. This tone is exactly what sets The Beatles apart from the rock music genre.

Rock music is classified as having elements of jazz and rhythm and blues with the added sound of electronic instruments and drums. The genre is known for its strong drums and backbeat, which is something I believe The Beatles are lacking. The Beatles are also missing a key vocal element when it comes to rock. The Beatles’ vocals are very harmonic and sweet, which is contradictory to the usual raspy and primal sound that majority of rock musicians have. The Beatles may have sparked a new wave of music, however, their music does not deserve to be considered rock in the same way that other true rock bands’ music is. What is it that leads people to accept the idea that The Beatles are a rock band?

Beatlemaniacs will say that The Beatles are a rock band because their music was different from the swing rock of the fifties and because they have the standard ensemble that the average rock band has. But despite that some people say that The Beatles aren’t rock, when they first got their start people weren’t sure how to refer to them and took their weird style and defined it as rock.

After conducting a survey amongst people in Orange County, it is clear that others’ opinions of The Beatles vary.

“They’re one of the best [bands], but I don’t think music can be described as ‘the best’ because it’s so subjective,” said Drew Delallana, a senior at Huntington Beach High School. “I believe [The Beatles] are considered rock because rock is a huge genre and they fit so many categories of it.”

While Delellana says that The Beatles may have some songs that cover many different genres, the majority of their sound is not rock.

Another student at HBHS, junior Kelsea Andrews said, “Although I am a big fan of The Beatles, their music isn’t rock, listeners in the 60’s just didn’t know how to categorize it, so they called it what made the most sense at the time, [which was] rock.”

Andrews brought attention to a key argument when it comes to deciding if The Beatles are a rock band: generational concepts of music.

The amount of music genres, and sub-genres, that we recognize has greatly expanded over the last few decades, so why do we continue to categorize things the way we would have several decades past? Although The Beatles do not have a real rock tone to most of their music, even for 60s standards, I can accept and understand that some people believe that they do. However, there should be a conversation about adapting the way they are categorized as a band.

Rockabilly music, better known as 50s rock, is a music genre that was made to describe the genre of music that took over the media in the 1950s. When Rockabilly artists, such as Elvis and Johnny Cash, were popular they were most commonly referred to as rock, much like The Beatles. The Rockabilly music genre was created in order to help separate the rock of the modern world from the rock from back then, so what’s stopping us from doing that again? The Beatles are a band with a sound that is very unique to them and the time that they were producing music, and it is because of this that they do not fit into the vibe of rock, specifically not rock now. So, we should create a genre for their specific sound and for other bands that also have this same style and have been poorly categorized.

The idea of inventing a genre just for The Beatles is one that many Beatlemaniacs would be in favor of, so why not make it a reality? Although The Beatles may not have my heart, giving them their own genre would solve a long-standing discussion on the topic and satisfy both fans of the band and people who have a distaste for their genre categorization. The band should be classified in a genre that is made up of a few other genres. Some of the genes that The Beatles are arguably comprised of are soft rock, folk, psychedelic pop, and pop-rock. These genres sum up the different sides of their work without limiting them to one sound. Now, I am not sure what title this genre would be given, but these are the sub-genres this genre should be made up of.

The Beatles have been a very influential band throughout music history and the amount of people who idolize the band is not short of millions of people, but why? People in the younger generations, such as myself, have grown up with The Beatles due to their parents and grandparents who were alive during the height of The Beatles’ career. This early exposure has caused people to think that The Beatles are the greatest band to ever produce music, even if they do not know why they think this way, because of how it was rooted in our culture. However, despite people not knowing why they love The Beatles, they can not help thinking of them as the best band in history.

The Beatles, no matter if you enjoy their music or not, are an objectively influential band. They helped introduce new sounds to the world and showed that musicians could dabble in multiple genres. Whether or not they should be categorized as a rock band is still something that is ultimately up to the listener to decide. Classifying The Beatles as something that is not rock will help settle the tension between rock fans and Beatles fans, and is long overdue.