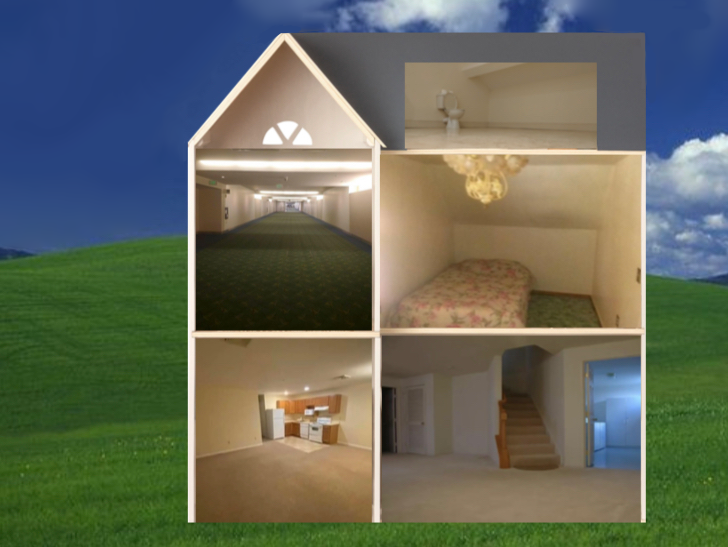 A collection of liminal rooms under one roof against an idyllic backdrop. (Artwork by: Zach Weisheit )

A collection of liminal rooms under one roof against an idyllic backdrop.

The unexplainable, eerie internet aesthetics that people love to make into room decor and art is not just derived from quirky girls drawing mushrooms and eyeballs dripping with red paint on their doors. The origins of these now-mainstream trends are much more interesting than culturally appropriated evil eyes and blurry photos; the actual inspiration comes from Liminal Spaces.

Liminality is an idea that is being used more and more in newer media, and has been made into an aesthetic as a part of the internet’s “weirdcore.” Screenshot Media describes weirdcore as, “An ‘online aesthetic and art movement’ featuring digitally constructed or edited images to convey feelings of confusion, disorientation, alienation, and nostalgia. Also known as Oddcore, Strangecore/Creepycore, Weirdcore visuals are influenced by the general look and feel of images shared on an older internet.”

Liminal spaces are a huge inspiration for this aesthetic and even helped popularize the concept.  A similar concept to liminal spaces was introduced in 2019 called “The Backrooms.” These rooms are classified as liminal spaces but have a separate objective and a new feeling: terror or fear. The Backrooms are almost always described in a similar way, a seemingly endless collection of walls, rooms, and halls of empty yellowish wallpaper with washed-out fluorescent lights. The rooms often look as though they are abandoned offices or warehouses.

The physical game was developed in 2019 based on Creepypasta’s The Backrooms.

The main goal of a backroom is to go as far into one as you can, like a maze, with the idea of going slowly insane and losing the game. However, the game never actually ends and you simply travel forever. If the game does suddenly stop, this means that you have died. The idea of dying in The Backrooms is called “no-clipping” and is equivalent to practically breaking video games physics in real life. You no-clip out of reality and subsequently, this is also how you’d return home. This idea reflects the fear that follows The Backrooms and how it works as there are 12 alleged methods of entering the backrooms. The process of entering The Backrooms can be extremely dangerous online, however, it’s important to note that the backrooms are not real.

The concept of this Backroom game and liminal spaces heavily overlaps with Alternate Reality Games (ARGs). ARGs are types of interactive games that are completely online with real-life components, yet, are told in an alternate reality. The characters are fake people or played by members of the ARG. The Backrooms are considered an ARG because the games are a type of strategic roleplaying with a well-planned-out plot. The only difference is that the storyline is not solely told through talking. ARG’s are similar to roleplaying but can be performed or displayed out on any form of media.

Although The Backrooms are a liminal space, access is much different for the two. A liminal space is an empty, barren place with meaning and emotion. They are “cross-over” spaces. They are still liminal even if people find a way into them, as a person’s presence does not define the liminality of a place. Entering one is a part of the experience and purpose.

This isn’t a brand new concept. The term liminal is the Latin word limen, meaning threshold. The term liminality was coined in 1909 by Arnold Van Gennep. The concept of a ‘Liminal Deity’ was seen in Greek mythology who was called the “crosser of boundaries.” Arnold Van Gennep wrote about liminality in “Les Rites de Passage.” This concept was also used in folklore and briefly mentioned in the Bible. The feeling of a liminal space can be very different from how it is presented in photography, it is a kind of art. A liminal space holds a feeling of uncomfortable unfamiliarity or an unknown familiarity that creates distress or panic. The idea is to create feeling, commonly referred to as nostalgia. There are a lot of different feelings and liminal spaces. Liminality is an uncertain place, a threshold of realities intersections; the Limen Crossing Road.

From Liminal Spaces-Lost In Unknown, they describe this phenomenon as “the spaces in-between where you are and where you want to be. Liminal Spaces are the loading zone.”

Many different types of liminal spaces exist, each having its own aura or feeling to them. Sometimes they hold their own specific purpose. These spaces can be subcategorized by House (or hotel), Outdoors (or pool), Generated, and Mall (or store). There are niche types of styles to liminal spaces within these categories. Some common ones are arcades, hallways, old video game scenery, empty living rooms, and vacant department stores. Deserted childhood rooms and old playgrounds hold sad nostalgia as opposed to long dark hallways and basements, which are unsettling and eerie.

Liminal spaces have this uncomfortable feeling because they are a space no one is supposed to be in. They are emotional spaces that are difficult to escape or locate. Liminal spaces are supposed to be a place of pass-through, you walk through as a crossing-over space. The uncomfortable feeling can derive from the homey liminal style. People are familiar with the outline of how some of these spaces are set up, but the eerie aspect of them makes these places feel unsafe. It is as if you are in an abandoned house that feels too much like your own.

Liminal spaces hold an important purpose of crossing between two places, often realities. They can be seen in dreams as a type of pathway or trial. Their role is to provide growth, acceptance, grief, and evolution as you pass through liminality. The emotions they hold are important to one’s journey, to evoke feelings of fear or comfort.

Because they are the physical spaces between your two destinations, liminal spaces are—for many people—spiritual experiences of healing and transformation.