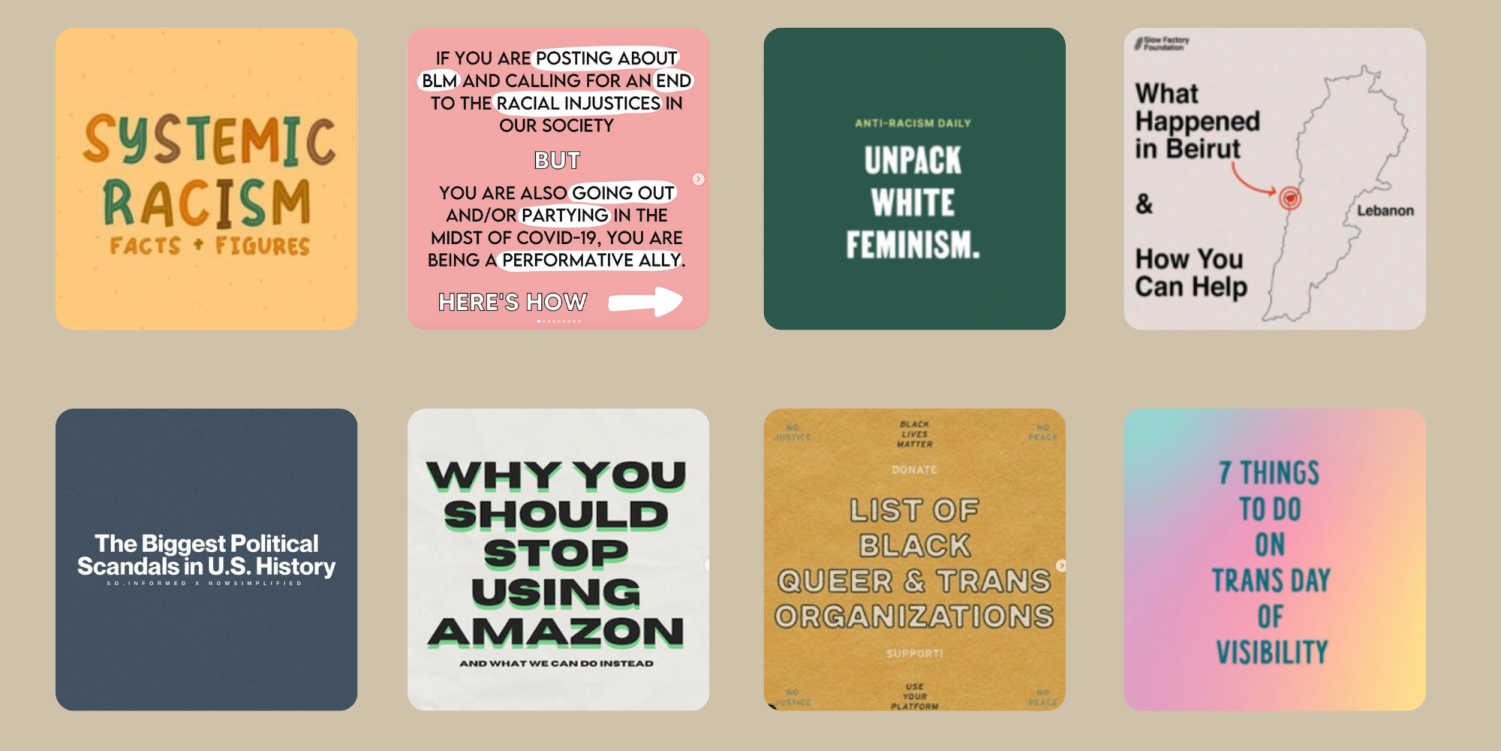 Social media activists have began posting info graphics in order to spread information to their followers.

What is Wrong With Social Media Activism?

Social media news and infographics have seen a major spike since the beginning of quarantine and continue to follow major events in social justice history.  Many new activism accounts have been created, gaining thousands of followers and an immense amount of trust from their audience. Though this is a great way to spread information to viewers on platforms such as Instagram, TikTok, and Twitter, many problems result.

Over 91% of the world’s population owns a cellphone, adding up to about 7.26 billion people. In the United States, 7 in 10 cellphone owners use social media and, because of this, more and more people are using platforms on their phones to find information.

“For most, actual news on TV isn’t a trustworthy source, and we consume so much time on our phones [and] on social media so I feel it is truly important to advocate for positive and reliable news on social media platforms,” says Roslyn Brown-Bilyeu, a junior at Huntington Beach High School (HBHS).

Younger generations are the biggest targets and consumers of social media news, likely because they are traditionally the most well-versed with these platforms. As of 2019, the average age to get social media was 14 and teens spend between 5 to 7 ½ hours a day on these apps according to Common Sense Media. Because of this, teens tend to get a lot of their news from these sites. Being at a more vulnerable and developmental stage in life, they are more susceptible to false information and mental damage.

A trend that has found its way into social media politics is reposting. Many people share infographics or calls to action on their stories (a method of posting which deletes after 24 hours) in order to spread the word about issues and gain support. Some advertise go-fund-me pages, protests, and messages to those in office. Even though the intentions of these posts are genuine, the results often are not. These trends can lead to widespread misinformation and the flooding of negative news on people’s feeds.

Confirmation bias is also a major issue. This is when someone seeks out information that confirms their own opinions and views. When a social media user likes posts and follow accounts that they agree with, social media platforms will continue sharing posts with similar views on your feed. Because of this algorithm, the news is tailored to what one wants to see and consists of a singular opinion. Additionally, the people behind these accounts are rarely known.  So in most instances, followsers don’t know who exactly is spreading this information.

Inaccurate information is also proven to spread faster and even be more widely accepted. According to the Massachusetts Institute of Technology (MIT), false information is 70% more likely to be reposted and spreads six times faster than factual news.

“I try not to let it consume my perspective because of how easily misinformation can be spread, but even fake news affects me a lot… I try to fact check it myself but I know for a fact I believe a ton of false information because I never bothered checking,” says Ella Acciacca, a senior at HBHS.

Even when the post is technically correct, there is only so much information users can fit onto 10 small squares, 3 minutes, or 280 characters. The platforms are not set up to handle weighty issues, and when traumatic news stories are mixed in with a friend’s vacation pictures, it can become a lot to handle.

A junior at HBHS, Paige Kim states, “Social media is not a format built to be able to handle the complexities of issues such as systemic racism, the Israel-Palestine conflict, the Uyghur Muslim genocide, or other issues that require further research beyond an infographic.”

The constant stream of information coming from activists and reposters can be overwhelming and even incorrect. When people are looking to social media as a form of winding down and taking a break, seeing heartbreaking news can quickly become too much. Often these posts are accompanied by a sense of responsibility, presented with the lens of what you as the individual user can do. The solutions presented typically feel insignificant or are out of reach for just one person. In turn, this leaves people helpless and guilty, feeling the weight of the world on their shoulders.

This is especially harmful to minorities and other groups who are often reminded of trauma when they are simply trying to scroll through their social media feed.

Kim says, “News affects my mental health greatly, especially during different waves of activism where I’m flooded with graphic videos of POC [people of color’s] death. During the wave of activism surrounding Anti-Asian hate and the Stop AAPI (Asian-American and Pacific Islander) Hate movement, I found myself being extremely mentally exhausted and broken down because I was subjected to watching Asians die every time I opened my feed.”

They go on to add, “Being Asian, it was a constant reminder of the place I held in America [that] white people will use to their own advantage, whether it be a scapegoat for a pandemic or a way of white people feeling “woke” posting videos of brutal death and violence on their feeds.”

Though most posts carry good intentions, failure to add a trigger warning or do proper research can be damaging to individuals, groups, and movements as a whole. We might feel like we are starting a conversation and revealing injustice, but without proper sensitivity, we are only perpetuating trauma. Not every horrific video needs to be posted; there are productive ways to have these conversations without graphic images and mental harm. In addition, we are sharing this information in a space not equipped to handle highly difficult, sensitive, and nuanced topics.

The idea of spreading knowledge is a great thing, but the execution is a different story. If we can start carefully examining what and how we post about current events and create the right space to do so, news can become a positive part of our lives.