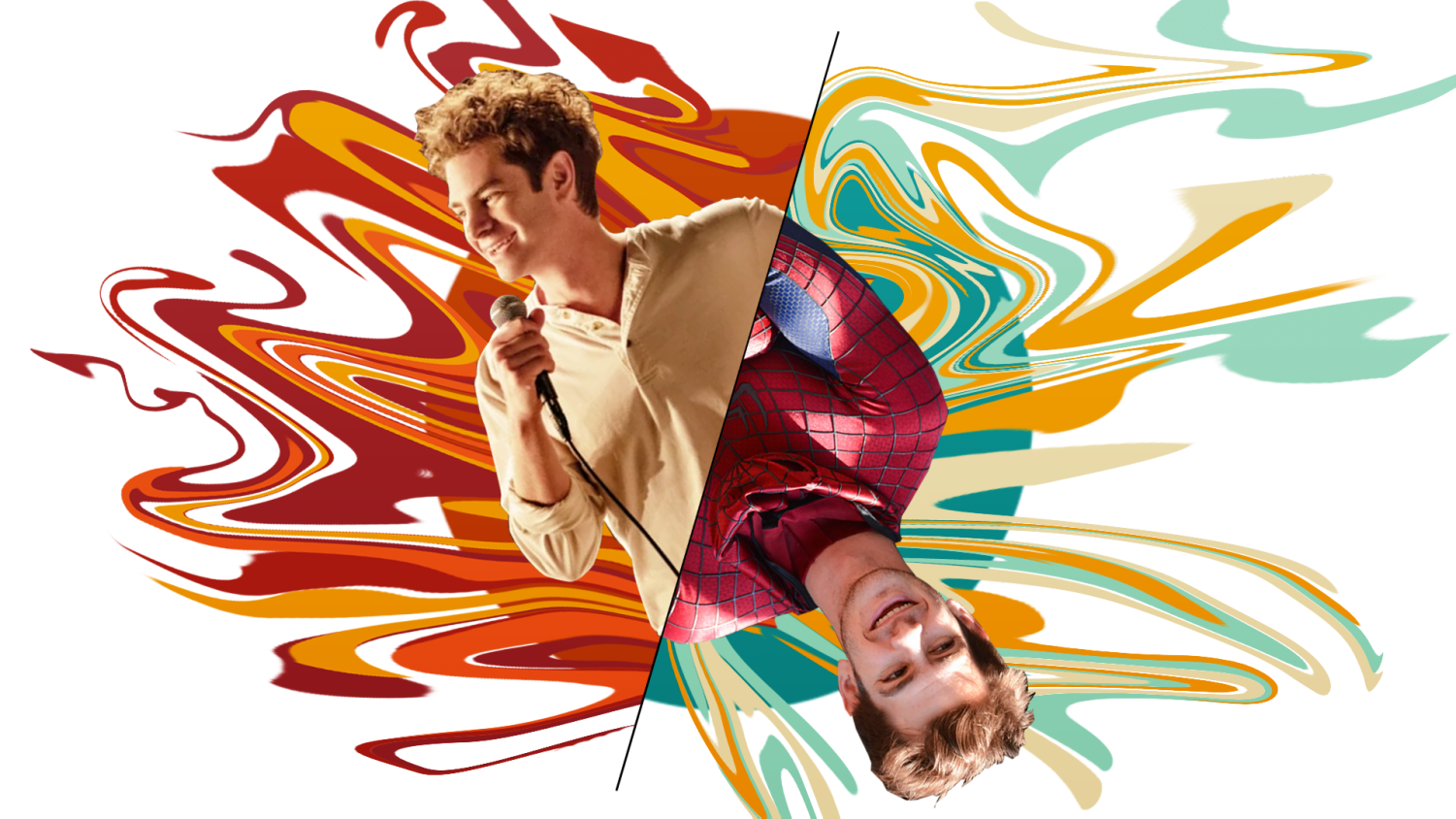 Split-image of Andrew Garfield as Peter Parker and as Spiderman against an abstract background. (Artwork by: Jonathan Tran)

Split-image of Andrew Garfield as Peter Parker and as Spiderman against an abstract background.

On November 12th, the movie adaptation of Tick, Tick…BOOM! was released on Netflix. This film is an autobiographical musical detailing the hardships Jonathan Larson faced as a writer struggling to get his first musical staged. As his 30th birthday rapidly approaches, existential dread sets in. Directed by Lin Manuel Miranda, this movie-musical stars Andrew Garfield along with Alexandria Shipp, Robin de Jesús, and many others.

Tick, tick…BOOM! was originally composed by Larson as a “rock monologue” that he performed in various places, including the Second Stage Theater and Village Gate before finishing at New York Theater Workshop. After Larson’s death his most popular show, RENT, became a legendary Broadway musical. His friend and producer, Victoria Leacock, had playwright David Auburn rewrite the solo work of Tick, Tick…BOOM! as a musical for three actors, resulting in the musical seen today!

The show originally opened in 2001, Off-Broadway, featuring Raul Esparaza as Jonathan Larson, Jerry Dixon, and Amy Spanger. I absolutely loved watching the film adaptation after it came out over Thanksgiving Break, and have already seen it twice since then. The songs are stuck in my head constantly; some of my favorites being “30/90,”  “Come to Your Senses,” and “Therapy.” Tick, Tick…BOOM! contains a beautiful combination of upbeat and fun songs as well as slower, touching songs. Who knew that Spiderman had such an amazing voice?

In an exclusive segment for CBS Sunday Morning, Miranda explains that he had his eye on Garfield for the role but was uncertain of his musical ability. Lin-Manuel Miranda’s massage therapist, Greg Miele, is friends with Garfield. While Miele was working on him one day, Miranda asks, “Can Andrew Garfield sing?” Miele ends with “Andrew can do anything my friend. Of course he can sing!” As soon as Lin left, he called Andrew, and asked, “Can you sing? Because I just lied to Lin-Manuel.”

Garfield was originally hesitant to accept the role, but after hearing that he had a year to prepare, he agreed. After a year of taking singing and piano lessons, he was ready to start shooting.

Influential Cast and Many More…

There are numerous famous and successful actors, actresses, writers, composers, lyricists, and others who made cameos throughout the film. Barbara Ames, Lin-Manuel Miranda’s elementary school music instructor, can be seen giving a young Michael a flower during a performance of West Side Story.  In a tweet, Lin said, “Also, Miss Ames, thanks for casting me as Bernardo in 6th grade. Wasn’t it fun staging WSS AGAIN??”

Roger Bart, a close friend of Jonathan Larson, sits at the Moondance Diner with James C. Nicola, the director of the New York Theater Workshop when Jonathan was a student there. Of course it would not be a Lin-Manuel Miranda production without an appearance from the man himself; he can be spotted as one of the cooks at the Moondance Diner.

As for the cast of Tick, tick…BOOM!, here are some facts:

In the song “Sunday,” there was…

Miranda included these legendary characters as a visual representation of Larson’s influences as well as cameos for avid Broadway fans to see their favorite characters in the movie.

The song, “Sunday” itself is an homage to Sondheim’s “Sunday” from Sunday in the Park with George. Sondheim was a huge influence to Larson and with this song, it is very clear. It is also a fun scene for Broadway fans to watch because it is filled with many celebrated icons who have influenced Broadway itself.

“We pulled from Larson’s real life for the film, whether that meant filming exteriors at the apartment building at Manhattan’s 508 Greenwich Street, where [Larson] lived, or enhancing their sets with some of his real belongings… The exterior in the movie is the actual building, with some visual effects to bring it back to 1990,” Production designer Alex DiGerlando says.

The production team did their best to authentically recreate elements that would add to the realism of Tick, Tick…BOOM! “This was more of a spiritual decision and a way to allow Andrew Garfield to walk in Jonathan Larson’s shoes and get into character by surrounding him with Larson’s stuff.” Garfield says, “There are a lot of things in the set that actually belonged to Jonathan, or we made replicas because some of them were too precious to subject them to possible wear and tear. Everything you see on the set has meaning.”

In a scene where Larson performs songs from his show Superbia, the audience is filled with famous composers and lyricists for Broadway musicals such as Hairspray, The Prom, In the Heights, Hamilton, The Last Five Years, 13, Fun Home, Thoroughly Modern Millie, Shrek the Musical, and many more. Another fun Easter Egg found within the film is that it is Sondheim’s real voice was in the phone message to Larson.

“I was in contact with Steve throughout,” Miranda says in an interview with Entertainment Weekly, “I showed him the page, I showed him Steve’s dialogue… and then he wrote to me and said, ‘But the last phone message to Jon, the language feels a little trite. I don’t feel like I would ever really say that. Can I rewrite it?’ I was like, ‘Gosh, a rewrite from Stephen Sondheim — do I accept this?'”

There was only one problem — Whitford, who plays Sondheim in the movie, had already wrapped his work on the project and was unavailable to re-record it. Sondheim offered to record the new version for Miranda, and it’s his voice that audiences can hear in the final cut. “It makes me weep to even think about it,” gushes Miranda. “Because he was such a mentor to Jon and generations of songwriters. But yes, he rewrote that message and recorded it himself and just sent it to me.”

It is even more incredible that he was able to be a part of this film because of just two weeks after the release of Tick, Tick… BOOM! Sondheim passed away on November 26th due to cardiovascular disease. Just after his death, there was a Stephen Sondheim Tribute Broadway Memorial Night where hundreds of Broadway’s best gathered to honor him. In an interview with The Hollywood Reporter, producer Erich Bergen, explains that “We all needed a place to go. We needed a place to be together to mourn and celebrate [Sondheim’s life] together.”

While at the event, “Every single Broadway cast was represented in one way or another,” notes Bergen. “It was endless and incredible. It’s like church. I’m not a churchgoer, but what I felt in that moment was as close to a religious experience as I will ever feel.”

It was a very special event to commemorate a very special person. “Sondheim was also an ever-present force in the community, engaging with vets and newbies alike. He saw everything, and if you wrote a letter, he wrote back. If you wanted notes on your work, he would advise you and tell the truth. This is a man who dedicated his life to musical theater, not only creating it but teaching it. You just felt like he would live forever,” continues Bergen.

Garfield is most notable for his role in The Amazing Spider-Man and the Amazing Spider-Man 2.  The English-American actor has been in many other productions, movies, and tv shows throughout the years. He has won the Tony Award for the Best Performance by a Leading Actor in a Play, Outer Critics Circle Award for Outstanding Actor in a Play, and the British Academy Television Award for Best Actor, to name a few. Miranda says, “I knew that Andrew Garfield was meant to play Jonathan Larson when I saw him in Angels in America. I had never seen such a fearless performance on stage in my life. I knew I needed that kind of intensity to play Jonathan Larson.”

“I pushed him out of his comfort zone a little bit,” Miranda describes. “He’s singing and he’s playing the piano. But he knew that he wanted to do that. He knew those were ways that he wanted to express himself that he hadn’t had the opportunity to do. And I knew that if he wanted to do it, he could do it, because I just left Angels in America thinking, ‘That guy could do anything!’”

Personally, I can not imagine a better person to play Larson than Garfield. There is even a physical resemblance between the two.

Miranda was greatly affected by the production of Tick, Tick… BOOM! as a young writer and talks about some of the lessons that can be taken away from this film.

“Here’s a show by my hero, and he’s telling me two things at once: It’s harder than you think it’s going to be, your peers are all going to go get real jobs, and you’re going to be the only one knocking your head against the wall of this childhood dream,” Miranda told Vogue. “But, if you love what you do, it is worth it. And God, I love sitting down and writing a song. It makes me feel so alive.”

Tick, Tick…Boom! was extremely fun for me to watch because I love musicals, and it illustrates beautifully what it is like to dedicate your entire life to something you love. Both Larson and Garfield’s passion radiates off of the screen and inspires those who watch it. I highly recommend watching this movie especially if you are a fan of Broadway or just love Andrew Garfield; I promise you will enjoy his unbelievable musical talent.