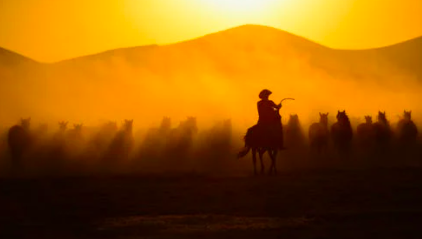 A posse of cowboys saddle up for their annual robbery of a train of carriages to help their town.

Dear Lorence,
The morning of the Cattle Run I fumbled my way down the Old Oak Saloon stairs as I
tried to shove my boots on my feet. I made it halfway down the stairs when I tripped on one of
those damned floor boards I always tell you about and rolled the rest of the way down. It is with
high pride that I can tell you I am one of the most graceful people out here in the West. Truly, I
could be a ballerina if that had been my calling.
Of course the barkeep, Mr. Harry, had to be at the bar washing cups. There were always
witnesses to my grace. He looked over at me with his infamous smug looks and to my
displeasure said,
“Morn’in.”
I may be being dramatic but let me tell you, that was the last thing I wanted to hear after
taking a tumble like that. But what did my Momma alway’s tell me?
“Sit up straight and eat your vegetables you damn heathen.”
The last part didn’t have anything to do with this but I took her advice on the first.
I stood up and dusted myself off, checking my pockets and my holster to make sure I
hadn’t lost anything.
“Fine morn’in Harry boy,” I said, tipping my hat at him.
“Going off to the Cattle Run today?” he asked.
“Yessir.”
I bowed dramatically and he rolled his eyes.
“I swear you all are going to get yourselves killed someday, keeping this thing up,” he
said, pouring me a little drink.
“Oh? Is that a hint of care I hear in your voice?”
“Well yeah,” he said defensively. “You and your gang are loud and cause trouble. But
you pay me well. So I can keep this place up and running.”
He placed the drink in front of me.
“And keep it runnin’ Mr. Harry,” I smiled at him, trying to put the worry wart at ease. “We’ll
bring you back a portion of our winnings and then make you go deaf with our singings.”
I then downed the drink and wiped my mouth.
“You better!” he called after me as I left through the saloon doors.
“Yeah, yeah.”
I stepped out into the dusty morning light just in time to see Katherine ride up, right on
schedule as she always did on the day’s we would complete the run.
“Good morn’in Kath!” I said as loud as possible.
“Oh shut up.” She laughed, dismounting her horse.
“Oh my, I do declare. Katherine Hawthorn just told me to shut it.”
She walked up and punched me in the shoulder.
“Good morning dirtbag,” she said, hugging me.
“Is everyone ready?” I asked.
“Yes of course. They are waiting just outside of town by the cattle path.”
“Ooo hoo hoo!” I said, rubbing my hands together. “Today is going to be fun.”
Me and Katherine mounted our horses, and rode out to a chorus of cheers from the
residents of our fine little town. We were about the rake in a ton of business today. When we
passed the Jail, I even saw the Sheriff. He tipped his hat at us and yelled,

“Don’t kill anyone, okay?”
“When do we ever?” called back Katherine as we rode by. When we finally left town
limits we broke our horses out into a dead sprint to go where the rest of our crew waited.
As we rode over the last hill I could feel a thrill roll through me. We saw the gang all
gathered up in a circle waiting for our sorry asses.
“You’re late!” groaned Monty
“Don’t be jealous,” I winked at him.
“Jealous? What would I be jealous of?!”
“Monty, shut the hell up,” said Katherine.
“Yeah Monty shut–” I chimed in, but Katherine put her hand up.
“You shut up too. They’re here.”
We all turned to see the line of carriages on the path. I counted ten ornate looking white
carriages all carried by identical white horses. I shot my hands up in the air.
“WOOOO! LET’S GO BOYS”
I pulled up a bandana over my nose and spurred my horse into a gallop. We raced down
the hill with me in the lead.
We were on the carriages before the drivers even noticed we were there. I pulled out my
gun and shot it up into the air.
The white horses panicked, splitting off into different directions, scattering like stomped
on rats.
Me and Katherine split off onto the biggest carriage. It was going fast but I could see the
left back wheel wavering on the rocks. I aimed my gun and fired, shattering the wheel. The
carriage crashed to the ground, rolling to the side, no longer being able to move. Its occupants
screamed as it skittered across the ground.
“Woo! Got one!” yelled Katherine in triumph.
She went around the front grabbing the driver as I smashed the doors with my foot.
Inside was a finely dressed man and woman. The woman wore a big poofy pink dress with her
hair all tall and lopsided from the crash. The man, on the other hand, wore a dusty black suit.
I aimed my gun at the two of them and said: “Hand me all your goods if you value your
life.”
They both flinched at my words.
“We don’t have anything!” begged the woman.
“Oh don’t play coy,” said Katherine, who had just finished tying up the driver. They still
didn’t move, frozen with fear.
Katherine sighed and I drew my other gun, training it on both the man and woman.
“Make a move and I’ll give you two mouths.” I gestured my gun at their faces. “Where do
you want it? Top of the head? Eh? Neck. Depends on how hungry you are.”
Katherine shuffled around in their carriage, tossing up their bags and searching the man
and woman for jewelry. Soon enough, we had filled our saddlebags full of stolen goods.
“Alrighty! Thank you folks for being so cooperative!” I said, getting ready to jump down.
“Hold up, ma’am,” said Katherine. “Take off your dress. I can fetch a high price for that.”
I could tell she was smiling under her bandana; she was up to something. I went along
with it though; who was I to argue with the inner machinations of Miss Katherine Hawthorn?

We left the woman in only her corset and undergarments and went to meet up with the
gang to see our loot.
“What was the dress for?” I asked.
“My little sister wants to ask out the Mckinley kid. She’ll be ecstatic,” explained
Katherine. “And besides, that lady will need a new dress, and Mrs. Haversham has been without
work for weeks.”
“Ah, who knew there was a heart under all that brashness,” I teased.
“I hate you,” said Katherine
“I know you mean love!”
We rode back to town and headed back to Mr. Harry’s saloon. Then I bought us all
drinks, and we split up our loot, with each of us getting a cut of money, including Mr. Harry of
course.
We decided all the jewelry would go to Mr. Flinn, since Mrs. Flinn had just fallen ill, and
Mr. Flinn could pawn off the jewelry to pay for her medical. The clothing, we decided, would be
given to Mrs. Haversham to sell, but some of our crew picked out articles to bring home to their
families. I personally picked out an obnoxious canary yellow dress with poofy sleeves that Satan
himself would find horrid and brought it up to Katherine.
“Aw Katherine! Isn’t it just so flattering!” I brought it to my neck. “Don’t you think I’d look
lovely?”
This made her crack a smile. “You look like a dog pissed all over you.”
“Thank you! Exactly what I was going for. It’s the new thing over in New York, you know.”
“Urine?”
“Yes ma’am!”
She laughed, and I was satisfied.
We delivered the loot and stood on Mr. Harry’s balcony waiting for the people from the
Cattle Run to come trudging into town. Soon enough, there they were. The corset woman and
the man came sauntering up with their entourage and we laughed and laughed. They didn’t
notice us though, they were too busy going into the town’s shops to buy provisions to replace all
the things we’d stolen.
“Woohoo! Successful day!” said Katherine leaning back in her chair.
“Still upset Monty?” I asked, leaning back towards him. He just rolled his eyes though.
“Damn straight!” I said.
After we got bored with watching the carriage people run around town, we went down to
Mr. Harry’s bar in the saloon, and I bought a round of drinks for everyone. We all planned to
celebrate, and after the carriage people went into their hotel, more folks joined us until we were
a loud and very delirious chorus of off-key voices. After a lovely night, I bid goodnight and
stumbled my way up the stairs, when I saw your letter there on my dresser. I wish you a good
day Lorence my love, and hope that you’ll come down from your high shelf over there in the
North, lower your standards and become a permanent member of our merry band of imbeciles.
I miss our adventures my dear. I hope you sleep well tonight.

Sam is sophomore and aspiring author who writes in fiction for both short stories, poems, and is currently working on writing and publishing her first novel. She has always had an active imagination and a drive to collect and tell stories. She loves to learn about politics and history and most of her writing consists of interesting historical and politically tumultuous settings.