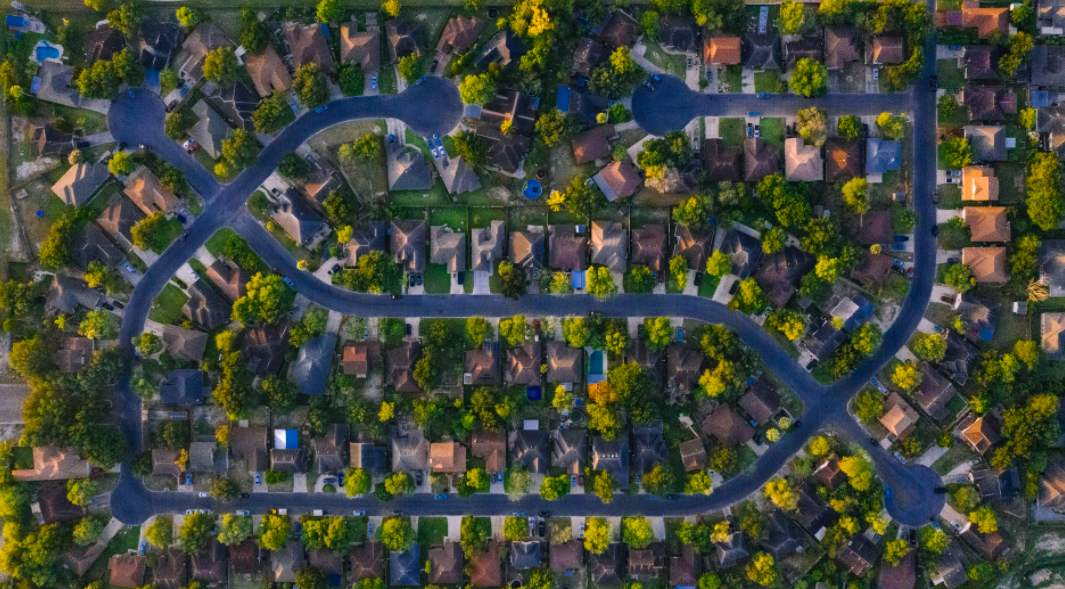 “Birds Eye View of Houses.” A collection of suburban houses in a neighborhood. Fair use via Pexels. (Photography by: Jeswin Thomas)

“Birds Eye View of Houses.” A collection of suburban houses in a neighborhood. Fair use via Pexels.

In The Great Gatsby, narrator Nick Carraway describes the well-kept nature of his neighbor Jay Gatsby’s mansion’s front lawn compared to his dilapidated plot of land, which he rents. “We both looked at the grass,” Nick says. “There was a sharp line where my ragged lawn ended and the darker, well-kept expanse of his began.”

Undoubtedly, the front lawn is an American concept. Before the Civil War, the notion of the front lawn as we know it today was not even something most Americans could conceptualize. At the time, the idea of private green spaces was associated with luxury, seen in places like the Palace of Versailles or at properties in England. Famously, Thomas Jefferson designed his plantation, Monticello, to emulate European landscaping, setting the precedent in America that large green spaces are demonstrative of wealth. And, in the United States, to be wealthy is to be successful in life.

American lawns are illogical. They are not utilized for farming or livestock. They do not directly improve the life of any person or group. Both a complete anomaly and irrational display of a lack of biodiversity, the front lawn is completely maintained for the sake of appearances, and nothing else.

In many instances, the front lawn is solely managed by societal expectations. Homeowners associations usually require a front lawn to be in a perpetual state of neatness. The lawn is reflective of a “good homeowner” and signifies that the person who lives in the house beyond the grass has the time and money to maintain their lawn. So, in America, a conventionally “nice”  front lawn represents socioeconomic success.

But, like many things in the United States, anything that represents social success conversely represents a deep-rooted racial and/or economic bias.

The front lawn did not become a middle-class construct until after the Second World War, in tandem with the G.I. Bill passed in 1944, which gave numerous benefits to World War II veterans, including decreasing mortgage rates for soldiers and their families. With a sudden boost in activity in the housing market, suburban neighborhoods began to pop up at a rapid pace.

In 1951, the first installment of the suburban tract settlement of Levittown was completed in Nassau County, Long Island. The homes were constructed cheaply and quickly, intended for returning veterans of the middle class. The idea behind Levittown was the idea of embracing conformity and group uniformity; every house had a neatly and perfectly shaped green grass lawn. Other developers across America followed suit after the success of Levittown, and eventually almost every white, middle-class American had a front lawn on their property. Along with the development of motorways, the commercialization of automobiles also increased the culture of living in suburbs and commuting elsewhere for work.

The ideology behind the American flight to suburbia stems from a wish for security and safety — women were leaving their wartime jobs for domesticity, soldiers were returning to their lives, and a culture of mass production and major profit was beginning to build for many corporations. In many ways, the front lawn perfectly represented this shift: it was almost a literal slice of paradise for the emerging middle class.

However, non-white Americans were generally exempt from the newfound “serenity” of suburbia. In Levittown’s original covenant, Black people were barred from purchasing a property, with the argument of “maintaining the value of the properties.”

While this clause in the Levittown covenant would quickly be stricken down with intervention from the Levittown Committee, this precedent was typical in segregated areas. The practice of redlining, or mapping out red lines around neighborhoods of  “high-risk borrowers,”  meaning people of color, was something that came into practice with the Levittown era. Redlined neighborhoods typically receive lower rates of public funding and are more likely to be subject to poor infrastructural development or urban pollution. It is common for homes in redlined districts to have a poor spatial or environmental opportunities for the front lawn.

There is a specific correlation between affluence and the quality of one’s lawn, and United States culture equates a well-managed front yard with success. Arguably, lawns are another American institution pertaining to outward appearances which unreasonably attempts to demonstrate success. Of course, this also goes to show the value that Americans place in materialistic practices, even if the practices do not benefit anyone.

Here are some other facts about the contemporary front lawn: in California, grass lawns require about 200 gallons of drinking water, per resident, per day. The grasses and other decorative greenery used in a front lawn are usually non-native to the region and emit more greenhouse gasses via maintenance than they absorb. Not to mention, California is prone to severe drought and needs every drop of water it can get. On a nationwide scale, the amount of lawn coverage is equivalent to the surface area of Texas.

Lawns are not only markers of the socioeconomic gap in this country, but they also seem to be extremely wasteful.  A plethora of videos can be found on Tik Tok underneath the tag #antilawn. Gen Z is known to be concerned with two concepts: environmental sustainability and striving for socioeconomic and racial equity. On social media, these two ideas find intersectionality in the idea of abolishing the front lawn.

While the toxicity of industrialized gardening has long been a point of contention since the lawn’s conception (Silent Spring by Rachel Carson, push for the Clean Water Act, etc.), social media has served to completely blow the fight for sustainable gardening practices out of the water. On EcoTok (a community of conservation-minded users on Tik Tok), videos range from topics such as promoting biodiversity in one’s yard, fighting for free-growing vegetation, or simply making fun of the impracticality of lawns.

Discarding the idea of the perfect front lawn works in tandem with leaving behind the idea of the American Dream, of Levittown, and of the picture-perfect life. For a substantial portion of Gen Z, this is a given. But for many older folks, the idea of a house without a lawn is something that is completely foreign. Still, as the lawn continues to stick out as a cultural object completely devoid of a logical need, generations-to-come are likely to slowly abandon the notion of a wasteful yard and embrace conservation as we continue to look towards the future.

For further listening: episode of the podcast “Pick Me Up, I’m Scared” which goes into depth about the idea of the “front lawn” and its impacts.