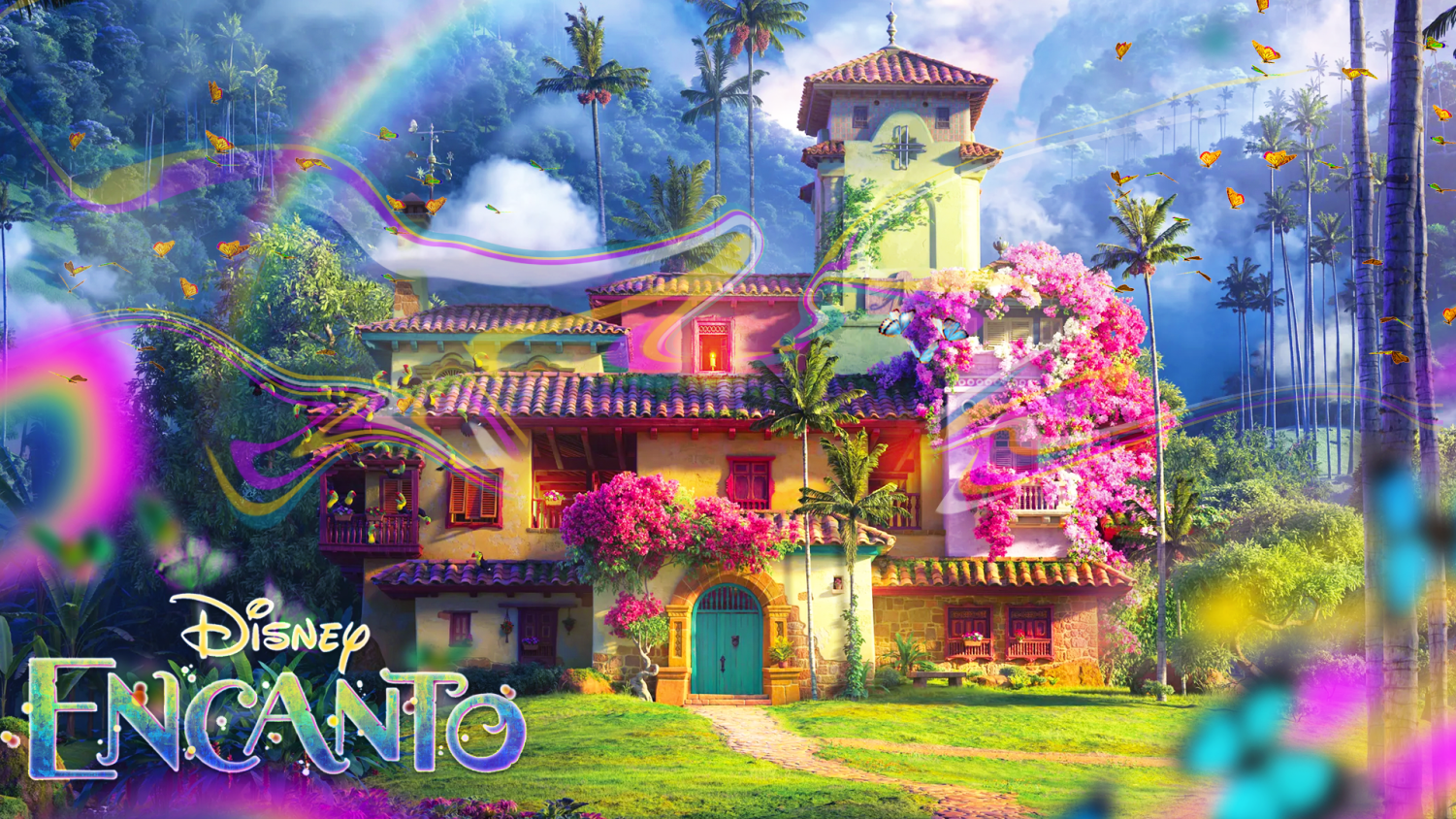 The colorful Madrigal Casita that encapsulates the magical nature of the Madrigal family. (Artwork by: Jonathan Tran )

The colorful Madrigal Casita that encapsulates the magical nature of the Madrigal family.

Encanto: Hispanic Representation at its Finest

In true Disney fashion, the new film Encanto is filled with joy, wonder, mystery, color, and of course magic; all things that continue to capture the hearts of many. However, Encanto is different from just any old Disney movie with its dark secrets and heavy storyline. It is the first Disney film that illustrates the true nature of generational trauma.

The story is centered in a small town in Colombia, inspired by the real city of Barichara. After their village was attacked and all hope seemed to be lost, a magical candle blessed the Madrigal family with a miracle: a safe, secluded town surrounded by tall mountains and magical powers inherited by the Madrigals for generations to come.

The storyline centers around Mirabel Madrigal, a young 15-year-old girl, who is filled with positive energy and loves to offer a helping hand. However, there’s one problem: Mirabel is the only (blood-related) Madrigal child who did not receive a gift. Not only does she not receive a gift, but the magic that protects the town and provides the Madrigal family with their powers appears to be dying as well. In a quest to prove her worth to the rest of her extraordinary family, Mirabel sets out for an adventure to discover why the magic is dying in hopes to restore it. Although this is the main conflict Disney wanted their young audience to focus on, there’s a larger lesson surrounding the story meant for adult viewers too.

The All Latino Cast: Behind the scenes, it is imperative to recognize the cast and crew that brought this film to life. Encanto was directed by Byron Howard and Jared Bush; who are both known for directing and screenwriting for other Disney productions such as Zootopia (2016) and Moana (2016). Along with the impressive directors who were a part of this film, the cast is also extremely important regarding the success of the movie. The movie showcased famous actors such as Stephanie Beatriz, John Leguizamo, and Wilmer Eduardo Valderrama. However, these are only a few of the many cast members that were picked to play this loveable cast. Not only is the cast charming, they truly illustrate what it means to have an ethnically diverse cast and provide representation within the cinematic field.

The act of representing a race or culture, especially in cinema, is extremely important as it allows the audience to relate to the characters and plot as a whole. The idea that Disney poured an immense amount of background, representation, and research into Encanto, is extremely important in the development of future generations of directors and their intended viewers.

The cast of Moana is another illustration of Disney incorporating ethnic representation into their cast and works. Auli’i Cravalho was born in Hawaii and is of Native Hawaiian descent.  Hawaiian Native and Disney actor, Auli’i Cravalho, attended the Encanto premier and said “with representation, we just get even more vibrant films. Walking this carpet and hearing everyone cheer for their favorite voice actor and speaking in Spanish. It’s just such a celebration of culture.”

The Encanto Cast and their Latin American Backgrounds:

The Power of the Dress: The dresses in Encanto were nothing short of beautiful, fun, and creative. Not only were they particularly designed, but they were also historically accurate. According to Travel + Leisure, they state, “Encanto [is] set in the beguiling real-life Valle de Cocora, located on the North-Western side of the country surrounded by the Andean Mountains. Bougainvillea spills over colonial mansions painted in vibrant tropical colors pastels.”  Valle de Cocora is known to be located in the Caribbean region of Colombia, and due to the intense heat and humidity women are commonly found to be dressed in light and airy dresses.  These dresses are also found to be very colorful, with multiple patterns and designs stitched throughout the dress meant to illustrate centuries of Hispanic culture and tradition.

These patterns and intricate designs can be found throughout Encanto as well! Multiple fans, myself included, have discovered the clever and hidden designs on each character’s outfits; these designs and symbols are specifically meant to illustrate the gift/ability that has been given to them. For example, Camilo is a shape-shifter, so Disney animators placed chameleons upon his ruana. Similarly, Luisa has dumbbells on the lace of her skirt to depict her super-strength. Hidden details and Easter Eggs are truly Pixar’s specialty!

Sophia Pollachi, a junior at Huntington Beach High School and in APA’s Costume and Design said, “The costumes in Encanto are a great representation of the characters that wear them. The hidden designs incorporate their magical talents discreetly into their clothing. I love the way that their families are distinguished by color palates of warm and cool tones.”

A different type of Disney Song: We all know and love the famous and very talented Lin Manuel Miranda. At only 42 years old, he has changed the idea of music as a whole in his films Tick…Tick…Boom!, Vivo, In the Heights, and in his famous play Hamilton. Now, he introduces his style of a song by writing the lyrics and music to Disney’s new film Encanto. Miranda believes that, unlike the other films he has worked on, Encanto is different. Miranda stated, “The joy of this was getting in earlier [within] the process. I was there from the beginning of the development; I felt like I was able to contribute more through the musical story-telling.”

All Miranda’s songs incorporate story-telling. They never fail to explain to the audience what is happening within the moment and how they are affecting the characters. Sometimes, I feel as if you need to know the movie and the background before you can sing along to one of Miranda’s songs. He is always able to incorporate the plotline and how each character feels into each specific song. For example, everyone knows the famous song “Let It Go” from Disney’s Frozen (2013) and whether or not you remember the storyline from the film, the song can be separated from the film as a whole. However, I feel as though for Miranda’s songs that’s not the case. You need to know what is happening, in that exact moment to capture the true essence and emotion behind the scene. To prove its success, even Encanto’s most popular song, “We Don’t About Bruno” beat Frozen’s “Let It Go” reaching #1 on the Billboard charts and continues to grow in fame as it spreads throughout social media platforms.

Finally, Encanto’s soundtrack was another beautiful representation of Colombian/Hispanic culture. Travel+Leisure states, “Germaine Franco’s [(composer and songwriter for the film)]  score for Encanto is infused with cumbia, considered the most quintessential of Colombian musical genres. Its soulful beat pulses through the streets of Barranquilla and Cartagena.” These songs and beats also brought forth many Colombian styles of dance and were also illustrated throughout the film. They were seen and known to be fun, energetic, and intense, and thanks to Kai Martinez, Disney’s representation consultant, and Jamal Sims, a choreographer, these dances within the film present Colombian song and dance, elegantly.

Generational Trauma illustrated throughout the Film:  Generational Trauma is defined as trauma that has been established by horrific or horrible events, but not only will this trauma affect the person who was impacted by it, but will continue to mentally inflict the way their future generations think.

Events such as the Holocaust, the Tuskegee Syphilis Study, foreign and Native American Migration are known to be some of the few major events that have constructed a mass amount of generational trauma upon their victims. Trauma is a personal struggle, but it can affect the life of their loved ones and future generations for years to come. Sadly, this idea is illustrated within Encanto.

Every character was affected by the Generation Trauma from Alma (Abuela) Madrigal, but this was only because she endured a great deal of trauma herself. Later in the movie, we see Alma and her husband, Pedro, enjoying their lives together in a small and comfortable village until they were attacked by armed men. Disney strives for realism and the historical research behind many of their movies is incredible. That is why many believe that when Alma and Pedro’s village was attacked, it was meant to illustrate the civil protest and retaliation that many villages endured in Colombia during 1899-1902. Today, this conflict within Latin America is known as the Thousand Days of War. Undergoing these events, while also trying to start a family, allows the audience to understand why Alma was as hard as she was on her family. The audience gains clarity as to why Alma was stressing her family as much as she was: because she didn’t wish to slip up and lose them, but ironically within this process they start to resent her.

This film not only illustrates how Generational Trauma can break a family but is relatable for many minority families who may have suffered from past trauma. Encanto is brimming with demonstrations of a Hispanic household, how within Hispanic culture your elders are greatly respected, how sensitive topics such as mental trauma and illness are ignored, but most importantly how the family is valued above all else.

The Power of Family: Although Encanto has major underlying lessons of trauma and mental illnesses, first and foremost it is a Disney movie that highlights the power of love. Like Frozen, it demonstrates the love that comes from family. Whether it’s between sisters, primos, or grandparents, Disney’s Encanto teaches that you are loved and family, no matter the issue, loves you unconditionally. Trust me, I know it sounds cheesy, but it’s true.