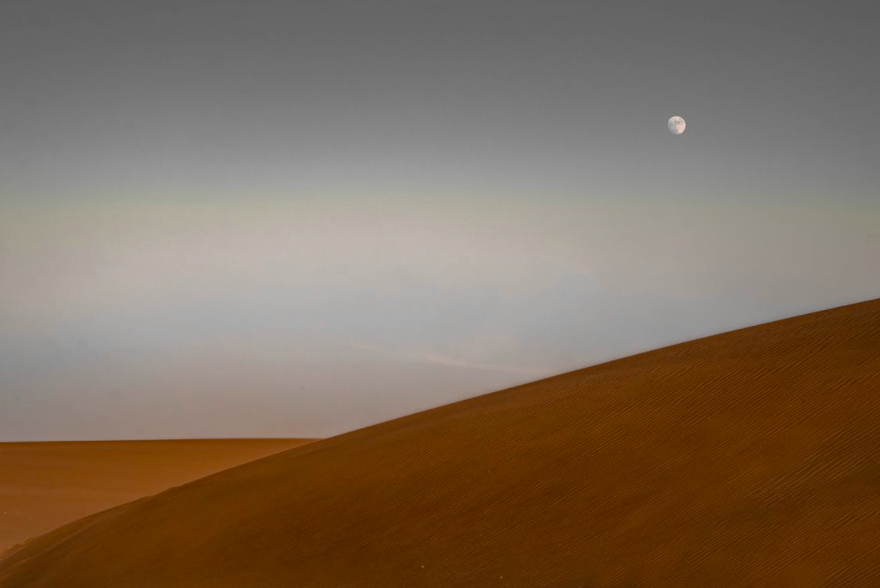 “Moon Over the Sand Dunes” uploaded by Francisco Sanchez. Fair use via Pexels.

A girl discusses the desert she grew up in.

The desert is full of strange things.

Why shouldn’t it be? A space so vast is guaranteed to have something interesting happen there.

The sands shift outside and inside the hourglass; time does not work the same here.

My first strange encounter is finding a goat skull half buried in the sands. I try dragging it home but my five-year-old arms fail me. It vanishes the next day.

A few months later, my friend and I are playing in what we call the high hills, massive mounds of unscalable sand to seven year-old hands, and one day, we decide to climb them. The sand swallows my shoes and snows in my hair and digs deep into my grimy fingernails until I make it to the top.

And from there, I see a tower. No, a monster hiding in a tower.

Dark twisted metal leans against metal and more metal and its red eye blinks and when I go closer I see wires and nails and the eye blinks faster and faster and the world melts around me and the globe spins. I no longer feel the sand in my shoes.

Shrill screaming wakes me as my friend cries to go back home. I want to look at the blinking eye again and I do not want to look at it but my friend pulls my arm and kicks sand into my eyes. We scramble down the hill and to our parents and our castles so the monster does not eat us.

The nightmares last for two months. Its shining teeth are inches from my face, with the head of a goat skull and the same blinking red eye watching me until I wake up sweating. My dad finally presses me on what is causing my nightmares, and when I tell him about the hulking metal monster, he says it is just a radio tower.

Rayyy-deeoh. I knew the word from the box with the turning dial and the crackling
voices.

“That’s where the voices come from?” I ask.

“How do they fit all of those people in the monster? Did it eat them?”

He laughs. “No, they play the songs off of CDs.” He holds one up and it reflects a pale rainbow. “Like this.”

“How do they take the voices? Is it like Ursula?”

“In a way,” he says. “But why don’t we go visit the radio tower? That should help you get
over your nightmares.”

My dad travels across the high hills with the confidence of an explorer, and my tiny body struggles to keep up with him. I look up at him, barely reaching his ribs, and then I see it again. The monster, entangled in the tower. I hide behind my dad’s legs, terrified it would charge at us and its shining teeth would be inches from my face, but nothing happens. The red eye doesn’t stop blinking, and it starts to blink faster once again.

“See?” He says. “Nothing to worry about. It just emits sound waves so we can listen to
music.”

I don’t move even when he turns around to walk back. He sees my line of sight and I am looking at the blinking red light again. Before I can walk closer, he picks me up and carries me back home. Before the eye is swallowed up by the hills of sand, I swear the blinking slows. We don’t talk about the monster– the radio tower– again.

Four years pass, but it isn’t four years even though it is. My aunt says I grew up so fast, and my parents look at her and don’t say anything even though they look like they want to. She instead pulls out a puzzle she brought for me. I haven’t liked puzzles in years. The three of them talk in the background while I piece together a blue and pink butterfly.

“What do you mean it’s only been a year? The last time I saw her she was six, surely it
hasn’t been that long.”

“We don’t know what to tell her.” I hear my dad’s voice echo from the kitchen.

“And we say that she can’t see the neighbor’s kid because she’s busy, but it’s because she’s fifteen and we don’t have a reason–”

My aunt interjects, “So you should move.”

“And what would happen when she tries to go to school? What if they ask questions?”

“Would it be safe for her to leave?” My dad adds.

“Listen, all I’m saying is that this might be what’s best for her, you have to–”

My mom is crying, but I don’t want to make her more sad than she already is, so I finish my puzzle.

My aunt goes back to California, but not before telling me about all the palm trees and the salt of the ocean and lots of other kids running around with popsicles. It sounds like a dream, but at my age, I know there is a difference between dreams and reality– I was no longer scared by the metal monster from my nightmares–so I stay in the desert.

As the days pass, I see the sun change color with the sky. The sun is red, unforgiving, yet comforting as it reminds me of the familiar light atop the radio tower. I watch the sunset almost every night until my mom calls me in to eat dinner. One afternoon, I take a walk for a while until I’m at the same spot as I was all those years ago. And there it is: my childhood monster, curled
around the tower. Its blinking red eye looks like the sun through smoke, reminiscent of the brush fires that appear every summer.

I walk to the radio tower until I’m standing right next to the tower, the hum of the wires comforting me as I try to reach my red sun, but my arms are too short. I float through sand and space to try and touch it, but I’m unsuccessful. I keep reaching and reaching and reaching and my arms get closer, but I’m too short and I get tired so I just look at the light.

My dad grabs my shoulders and I realize I’m as tall as his chin. The sun has set, but I don’t know how many times. I don’t understand what my parents are saying until I’m handed a plane ticket to California.

I haven’t lived in the desert since I was sixteen.