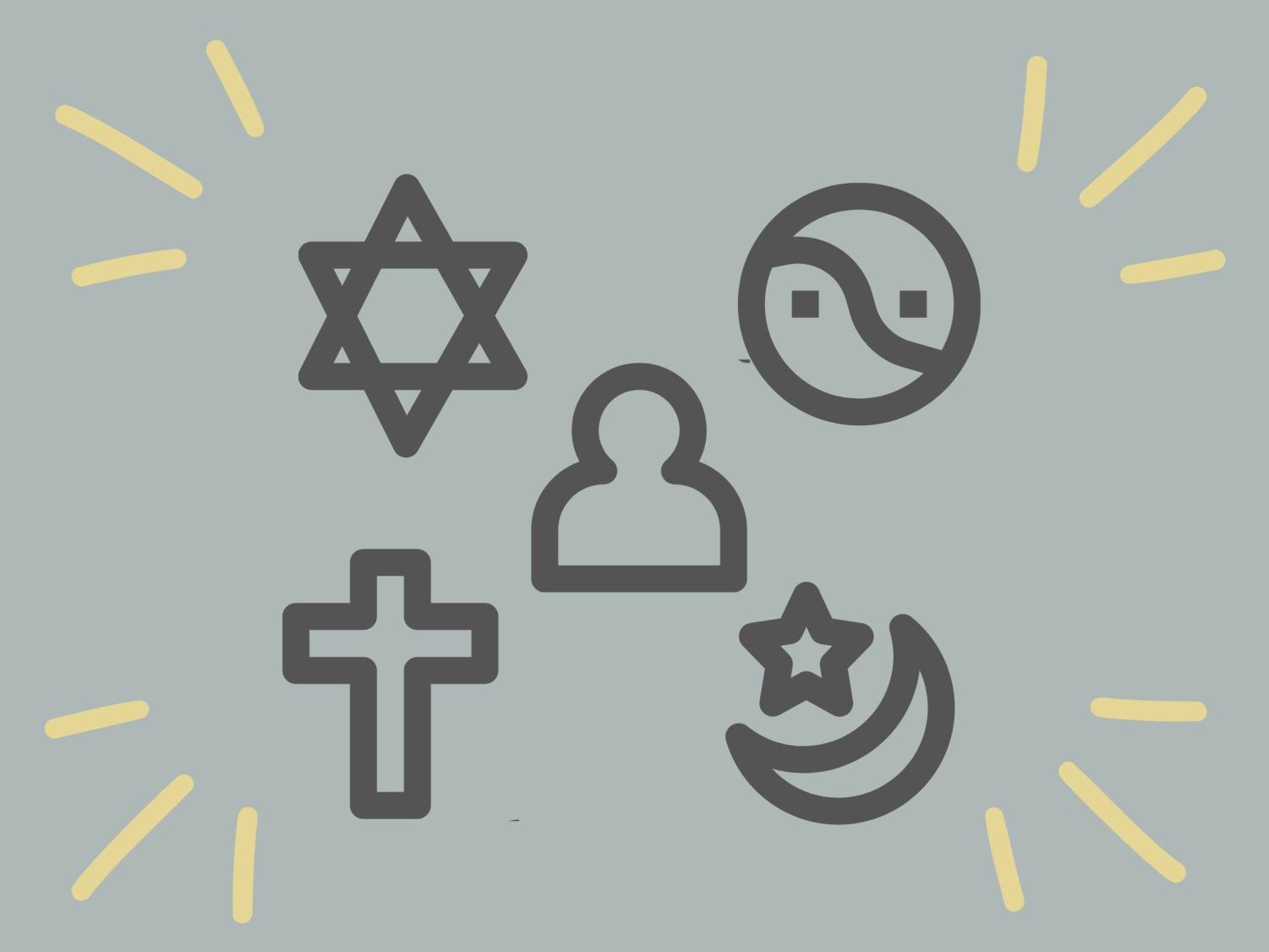 Interfaith is a program that works to create harmonious relationships between many religions. (Tess Walshe)

Interfaith is a program that works to create harmonious relationships between many religions.

“The More You Know, The Less You Hate:” How We Can Embrace Religious Diversity

As Huntington Beach High School (HBHS) students, we are all aware of the people who line up on Main Street holding out bibles to students, trying to squeeze in a word about Jesus or Heaven as teenagers walk by. The majority of students can agree this method is not very effective and is to some extent, unethical.

Most students avoid eye contact and just say “no thank you,” while others have snarky responses. Regarding these occurrences, students, staff, and administration react negatively towards their approaches. “It makes me more uncomfortable with the concept and pushes me farther away from it,” says Ella Acciacca, an HBHS senior.

This is a prime example of poor conduct regarding discussions surrounding religious identity. It can be difficult to talk about different faiths and more often than not we are not given the space to respectfully learn about them. Interfaith is a program and philosophy that works to change this by promoting inter-religious dialogue.

Despite the fact that most major religions hold the same values and similar versions of a monotheistic God, there is still discourse as to which is the “right” one. Many members of certain religions spend tremendous amounts of time and energy working to convert people when those efforts could be better spent learning.

The Interfaith Council is an organization created to change how religion is viewed while servicing the community. There are a few branches here in Orange County (OC) such as the Newport Mesa Irvine Interfaith Council (NMIIC) and the Interfaith Council of OC, which are local examples of a movement striving to provide better communication between religions. NMIIC’s mission is as follows: to create “a spiritual and ethical force of faith community representatives that enable inter-religious dialogue and service.”

“There are two key aspects of interfaith: 1) Getting to know about other faith traditions…[and] 2) Learning about and working together on social issues,” says Davis.

Though there are a plethora of faiths represented, some faiths choose not to participate. “It’s a loss to them and those who participate in interfaith,” Davis says.

Davis has discovered by expanding your knowledge of religious practices and religion as a whole, you can deepen your own religious practice. “I’ve found many of the practices of other traditions that are wonderful and can be emulated. When I went through some training at church… [they] said to look for things that I could have ‘righteous envy’ – practices in other traditions I liked and would make me closer to God,” she says.

For over 40 years, NMIIC has worked to increase community service and inter-religious dialogue. Through monthly meetings and community events, NMIIC brings members of a plethora of diverse faiths from Orange County together, striving for constructive and open dialogue surrounding religion.

“We promote the idea of a safe place to worship regardless of faith,” says Lane Calvert, the immediate past President.“ [I] joined the NMIIC in 1993 as a representative of the Baha’i faith [which] has been involved since NMIIC was formed in the 70s.”

Baha’i was formed relatively recently in 1844 and is the newest independent global belief system. It follows the fundamental principles of oneness, unity, and religious harmony. “The Baha’i teachings promote the agreement of science and religion, gender equality, and the elimination of all prejudice and racism,” according to Baha’i Teachings.

These foundations make the Council a great place to create change and work towards a better environment. “I enjoy helping create a world of peace for all peoples throughout the world,” Calvert says.

As the Representative for the Orange Stake of the Church of Jesus Christ of Latter-Day Saints, Davis got involved with the Interfaith Council of OC through her church. “I was asked by my faith leaders to teach a Book of Mormon class at Chapman University’s Fish Interfaith Center for LDS students and anyone else that was int

erested,” she says, “I started to learn much about interfaith there. A few years later I was asked to be my [faith’s] representative [within] the interfaith council.”

This council is an accessible way for communities to work towards a more tolerant environment that includes a plethora of different religions. For those wanting to get involved, NMIIC holds many community events both online and in person. Davis also encourages you to join an interfaith council. For students, there is a Youth Faith Forum on June 12th. “NMIIC also brings in speakers and panels on current social issues for monthly meetings,” Calvert adds.

Interfaith is also a great place for youth involvement. Including teens in the discussion surrounding religion is an integral part of forming a better relationship with faith in the next generations. “I think part of the teen years is to figure out who you are and your own [beliefs]. I think being involved in interfaith helps cement what you believe,” Davis says.

Davis also looks to the Interfaith Youth Council’s motto, “The More You Know, The Less You Hate,” as a major benefit for youth and communities in general.

Interfaith councils not only benefit religious groups but communities as a whole. Most councils across the United States partake in or are associated with community service. Davis says “there are two wonderful interfaith programs in [the greater Tustin area] that help the homeless/poor… Sunday Suppers at St. Paul Episcopal [and]… Family Promise.”

“[Interfaith] has reinforced my idea of the importance of organized religion and its ability to do good,” Davis says, “I’ve found many of the practices of other traditions that are wonderful and can be emulated.”

By working with other religions many people including Davis and Calvert have been able to improve their own religious practices, obtain knowledge, and support their communities. Participating in your local interfaith communities and making an effort to learn about different faiths is integral to healing relationships with religion.