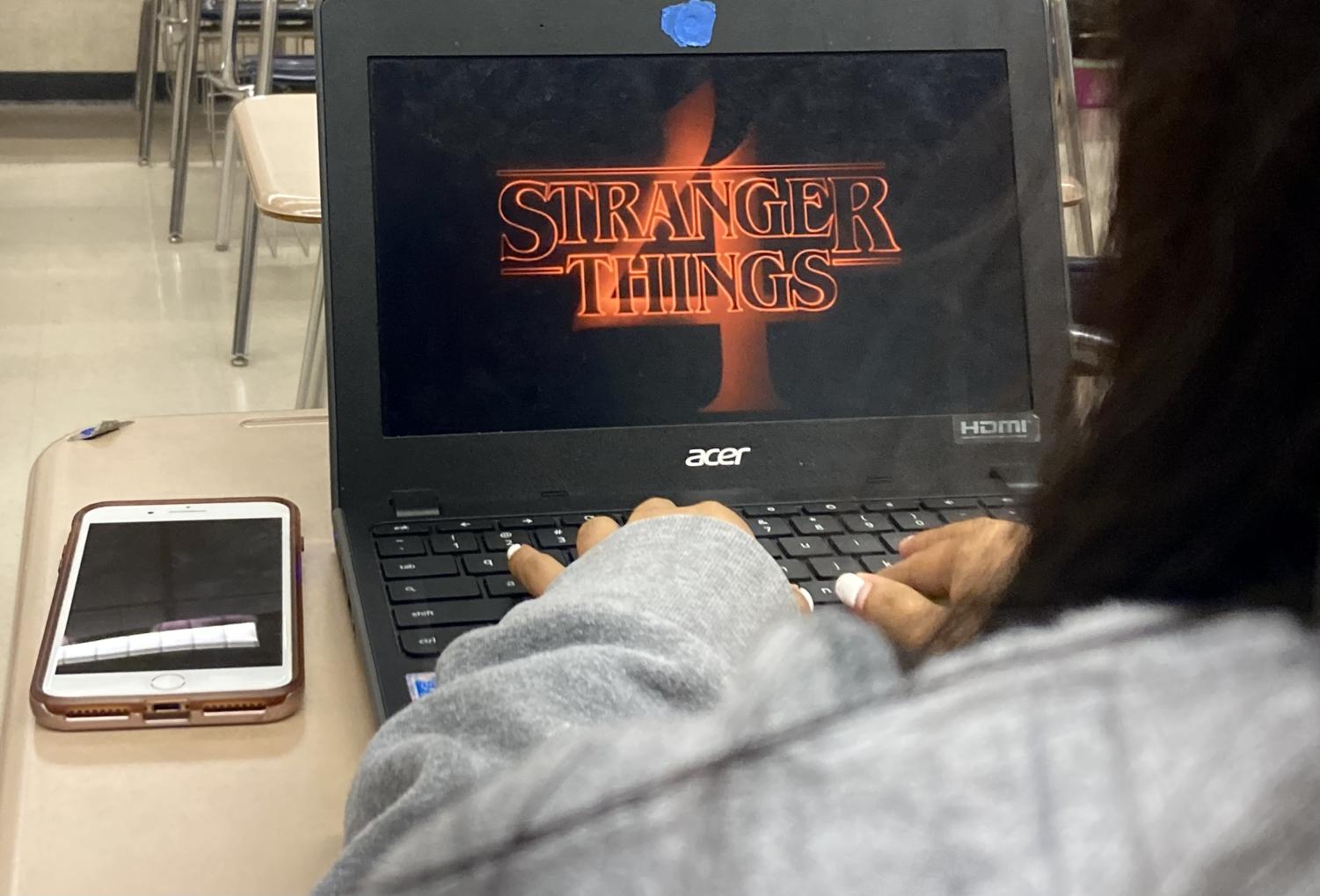 Warning: This article has spoilers from previous seasons and has a detailed summary of this season.

Three years after the third season was released on May 27, 2022, Stranger Things season 4 volume 1 returned to Netflix and many people were excited to see what was in store for the new season. Stranger Things, directed by the Duffer Brothers, focuses on a small town, Hawkins, Indiana, affected by another dimension known as the Upside Down. Because of this, and the events from the past three other seasons, this group of teenagers now face a new supernatural threat, Vecna. The new season includes flashbacks, action sequences, and reveals the backstories of a few of our favorite characters.

In an interview with Us Weekly, Gaten Matarazzo who plays Dustin says, “I think most would probably say it’s the scariest out of the previous three [seasons]”. And it definitely was! For the season included many suspenseful scenes and the visual effects were phenomenal.

Belinda Miguel, a junior student at HBHS, says “The scariest part was when the characters were possessed by Vecna, the sound effects of the bones cracking made me wince, and the visual effects of their jaw breaking was terrifying.”

There were many changes in the new season compared to the last one. Max Mayfield (Sadie Sink), and Lucas (Caleb Mclaughlin) have broken up, and Lucas has started to separate himself from the group in order to become popular during his high school years. Eleven (Millie Bobby Brown), referred to as Jane Hopper in this season, is struggling with both school in California and the loss of her powers. Robin (Mya Hawk) and Steve Harrington (Joe Keery) no longer work at Scoops Ahoy, due to the events of the last season, and now work at the Family Video store. The season also revealed Hopper (David Harbour) is alive, but imprisoned in Russia. Even with these new changes some things remain the same including everyone’s favorite duos Dustin and Steve, Joyce (Winona Ryder) and Murray (Brett Gelman), and Eleven and Mike (Finn Wolfhard).

This season, rather than just being located in Hawkins, the characters also have storylines in settings such as Russia and California. The different locations allow for many character developments without it feeling overcrowded.

Tyler Durrant, HBHS junior student says “I enjoyed this season, I liked how each location has an interesting storyline. My favorite location is Hawkins because their plot has the most action.”

In addition, many new characters were introduced in this season including Argyle, Eddie Munson, and Vecna. Argyle, portrayed by Eduardo Franco, is Jonathan Byers (Charlie Heaton) new supportive friend introduced in the Californian storyline and is described as a “chill stoner type.” Vecna, the new antagonist, played by Jamie Campbell Bower, brings curses to those who have faced trauma in the past. The team has to fight Vecna, not only to save the lives of their friends but to save Hawkins. Eddie Munson portrayed by Joseph Quinn plays a huge role in this new season. Munson is the leader of the Hell Fire Club, a Dungeon and Dragons club in which Mike, Dustin, and Lucas participate. Munson is soon caught up in the strange events happening in Hawkins after Chrissy, a cheerleader played by Grace Van Dien, is “killed” by Vecna in his trailer van.

“Eddie Munson is my favorite character out of all the new members because he has great chemistry with the rest of the group,” Miguel adds.

Although many people enjoyed the new season, some people didn’t find it as good as the previous seasons.  “Season 4 volume 1 was not as interesting as the other seasons, in fact, I found it kind of boring. Hopefully, there will be much more action in the next volume,” says Ashley Ornelas, another junior HBHS student.

“While I loved this season I feel like Will Byers (Noah Schnapp) and Mike Wheeler’s storyline got overshadowed by Eleven’s storyline, in the next volume, I would love to know more about these characters,” Durrant shares.

Because Stranger Things season 4 introduced new plots and many new characters, the season had to be split into two columns in order for the show to not feel cramped. Volume 2 will have two episodes and will be released on July 1, 2022; many people have already thought about their predictions.

“I think the group will reunite and kill Vecna in the next volume,” says Tyler Durrant, a junior HBHS student.

Ornelas says, “Although Steve is my favorite character, I have a bad feeling he is going to die this season.”

“I think Nancy and Jonathan will end their relationship and Steve and Nancy will get back together, I also think that Will might be attracted to Mike,” Miguel, HBHS junior adds.

Altogether, the new season was worth the wait, and hopefully the second volume will be even better than the first volume.