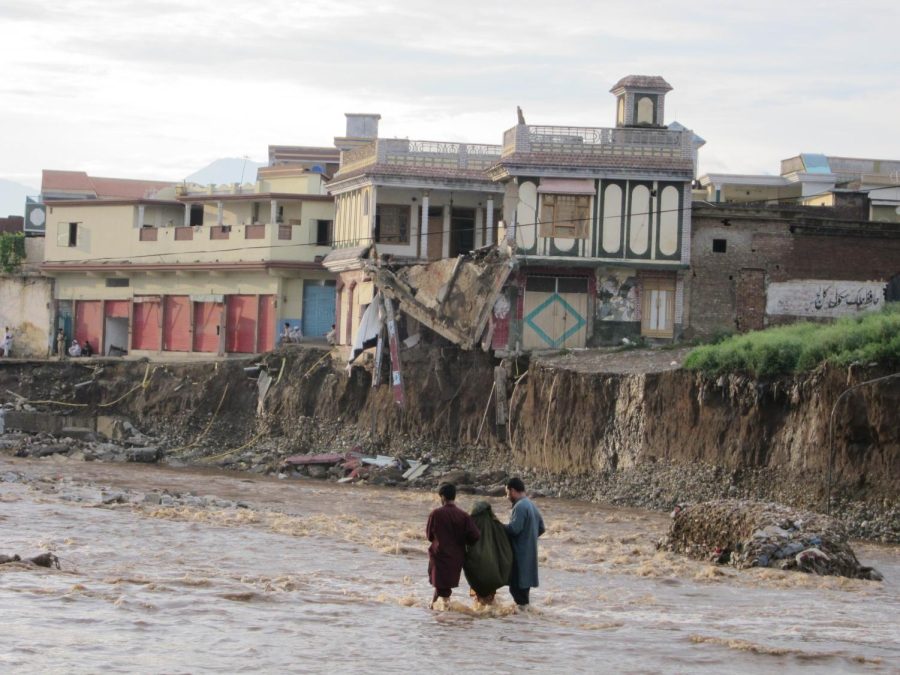 Two young men help an old woman down a submerged road. (Photography from: “Pakistan floods: thousands of houses destroyed, roads are submerged” by Oxfam International is licensed under CC BY-NC-ND 2.0. To view a copy of this license, visit https://creativecommons.org/licenses/by-nc-nd/2.0/.)

The Pakistan Floods: One of the Worst Climate Disasters

Since June 14, 2022, a third of Pakistan has been submerged under water. Due to an abnormal amount of rain during the monsoon season in June, the Indus River overflowed and flooded into several provinces along the river. As of September 20, 33 million people have been affected by the flooding. In addition, of the 33 million, 8 million people are displaced. Ten days after the flood began, the UN appealed for $800 million to aid those in need.

This flooding is unprecedented, and a large reason for that is the recent rise of climate change. Because global warming makes both the air and sea temperatures rise, more evaporation occurs leading to heavier rainfall. Pakistan already experiences the highest temperatures in the world, experiencing temperatures of 100℉ and above annually. During 2022, Pakistan has seen dramatic changes in weather; throughout the monsoon season there has been a 190 percent increase in rainfall, more the 30-year average and in March they faced the largest heatwave in 61 years.

Pakistan has always been highly vulnerable to floods, ranking 18 out of 191 countries with the highest disaster risk in the 2019 Inform Risk Index. This vulnerability has raised the question of why countries like Pakistan, which contribute very little to greenhouse gas emissions, face the most effects of climate change while many larger contributors do very little.

In 2019, the UN released a report stating that Earth has only 11 years until irreversible damage from climate change. Now in 2022, the world is closer to a global temperature of more than double the previously set limit of 1.5 degrees Fahrenheit.

“I feel as if there are more effective ways to stop climate change, but the world either cannot take that big of a change, has a closed mindset, or doesn’t have enough support to make a shift,” said Huntington Beach High School sophomore, Jolin Wang. “It’s shocking that the world only has 11 more years until irreversible damage, which is why it is important to act now.”

But even if climate change is reduced, Pakistan still faces another problem. Decreasing global warming can reduce the chance and strength of a natural disaster occurring, but mitigating the risk of catastrophe is another prevalent issue.

Pakistan has poorly built infrastructure. In 2010, Pakistan faced floods that were labeled as the “worst natural disaster to date attributable to climate change” by UN officials and climatologists. Since then, the Pakistani government has taken very little action in increasing its strength to combat future disasters.

“It’s helpful to have some sort of oversight or an organization that’s not just an individual person,” said Aaron Boucher, P.E., a licensed engineer at Holmes US. “You need someone to see the bigger picture and go wait for a second, this area has shown to be flood prone and it’s not really in our best interest to live there.”

But in Pakistan, the government does not work as effectively as they need to. Poor water infrastructure and drainage systems have diminished Pakistan’s ability to withstand sharp increases of water. Construction is not regulated very strongly, and many settle at the edges of rivers that are vulnerable to flooding. Buildings have also been rebuilt in areas most affected by the 2010 floods, further exacerbating the damage.The government also provided a late response: only forming a National Flood Response and Coordination Center a month and a half after the floods began.

These events in Pakistan should serve as a large reminder that climate change is a prevailing issue in our world, and further action needs to be taken to stop it. Pakistan is not the only country poorly prepared for disaster. Ensuring that all countries are well-built to withstand any disaster is an important task that should be further at the forefront.

Boucher continues, “An important thing for people to do is to remember what can happen and plan for that worst-case scenario.”