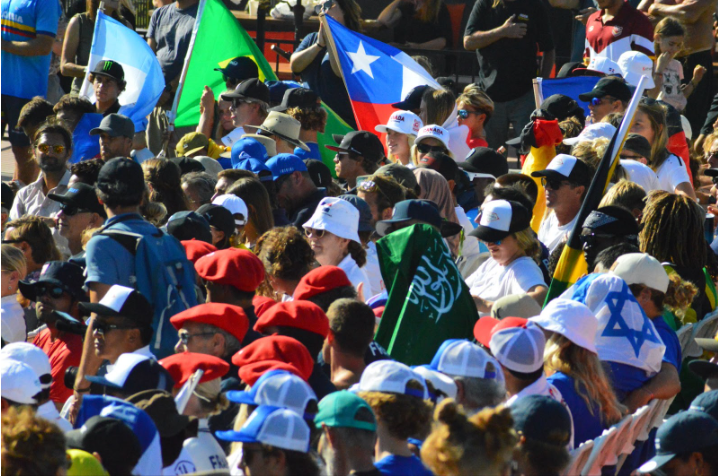 The diverse crowd at the opening ceremony of the ISA World Surfing Games. (Photography by: Lila Concepcion)

The ISA makes its return to Huntington Beach, for the World Surfing Games, since 2006.

On September 16, 2022, the ISA World Surfing Games were brought back to Huntington Beach. Its first return to Surf City, since 2006, was commemorated with a colorful parade, featuring HBHS’s surf team and marching band in the lead. Fifty-one nations were welcomed to Huntington Beach (HB) for the event, and many gathered on Main Street to watch the parade.

The march ended at the Pier Plaza where the Opening Ceremony began, and mayor Barbara Delglieze and CEO of Visit Huntington Beach, Kelly Miller, welcomed the competitors before presenting the Sands of the World Ceremony. In his speech, Miller describes some of the surfing histories of Huntington Beach, including George Freeth, Huntington’s first surfer, and Linda Benson, winner of the West Coast Surfing Championship in HB in 1959.

Miller said to the crowd, “We don’t believe there is another city in California that offers a more significant culturally and historically rich, competitive arena of surfing than right here: and you’re going to be a part of that.”

He also explained how the World Surfing Games will guarantee one slot for each winning man and woman from every country to the 2024 Paris Olympic Surfing Games.

The Sands of the World Ceremony included one flag bearer and one sand pourer from each country. They approached the stage, poured sand from their local beach, waved their flag, and some chanted. Each country’s sand pour was engaging, the most unique sand pour was New Zealand’s: they broke out into a ceremonial dance called a “haka.” An emotional and sympathetic standing ovation followed their turn on stage.

Before Aguerre officially announced the opening of the surfing event, Mayor Delglieze wished every country good luck in the competition. He quoted the famous surfer Phil Edwards in saying, “The best surfer out there is the one having the most fun!” 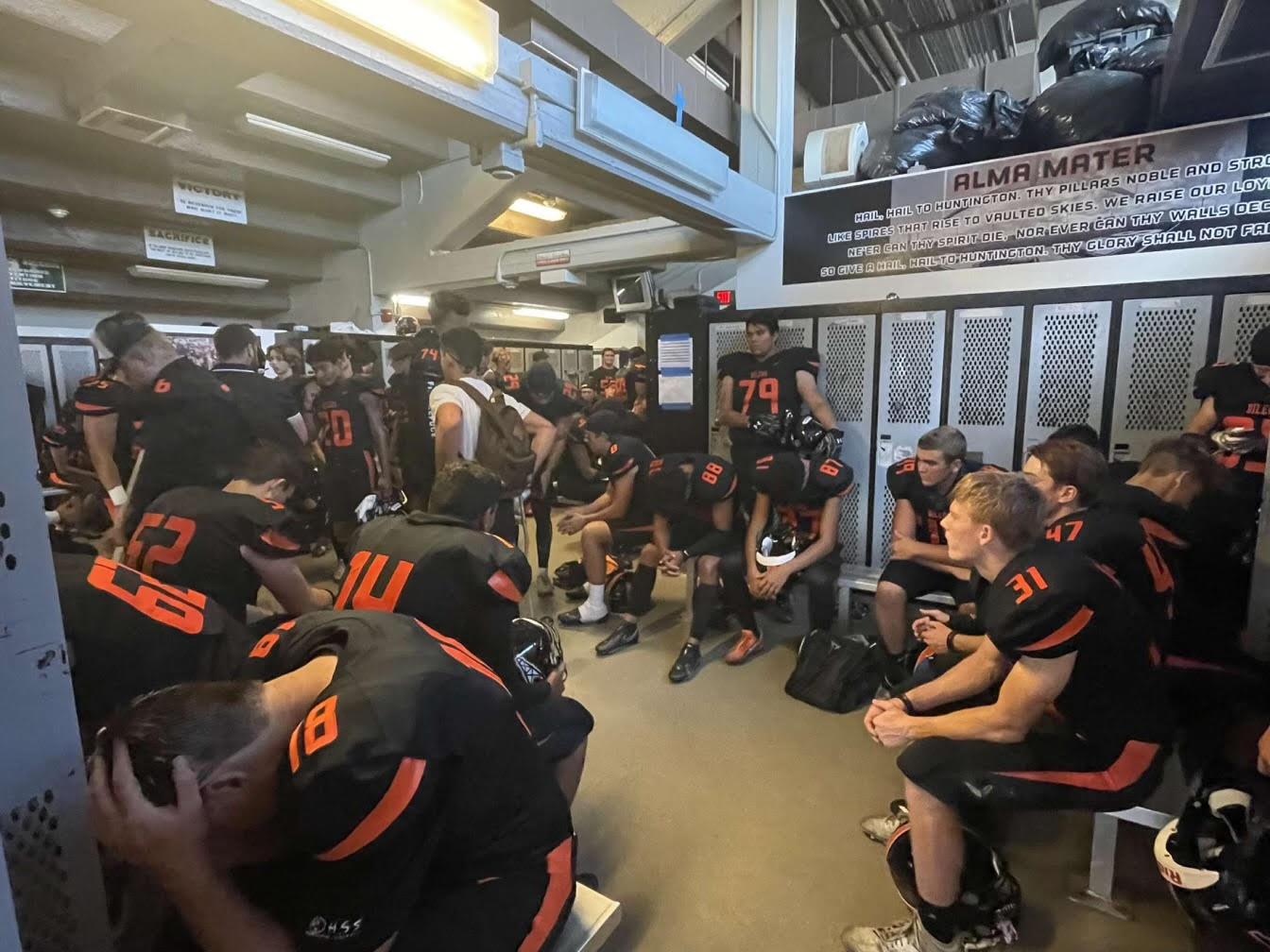 This is a picture of the Huntington Beach High School football team in the locker room. (Photography by: Jacob Totah)

The people of America love to watch football, but did you know you can make your own team? Fantasy football is a way for you to turn your football dream team into a reality of your own.

What is fantasy football?

Fantasy football is an app that allows you to create your own team of professional football players. When the season starts, you create a whole team, and as the season progresses you can make changes to your team. According to Sports Illustrated, there are three types of leagues: the redraft which is where you redraft your team every year, second there is the keeper league in which the owners stay together and play with each other every season and keep a specific number of players each season, and third, the dynasty league which owners stay in for a couple of years and keep their entire team for the upcoming season.

Also, according to the Entertainment and Sports Programming Network (ESPN), every week as you set up your lineup, each run, pass, catch, and scored touchdown is worth fantasy points. As you get matched up with different teams in your league, the winner is the one with the most fantasy points at the end of the week.

The fantasy football championship game takes place in the second-to-last week of the NFL season since so many NFL teams rest players if their fate is predetermined for the playoffs, according to Nola, by Caesars Sportsbook.

With football fans wanting to get more involved, there is a clear rise in fantasy football players. According to Sports Finding, a poll from August 2021 showed over 40 million individuals in the United States played fantasy football. As popularity increased in 2021, gross revenues reached over 22.3 billion dollars.

Sports Finding covers the main reasons fantasy football is known as the most popular fantasy sport. First, it is a manageable activity and since games are typically on Sunday there are fewer distractions with playing during the week. Secondly, there are more fans of the NFL since it is the most popular sports league in the United States.

Why do you play?

According to Imagine Sports, people generally play for the following reasons: competition, control, making friends, the thrill of victory, and the fun and rewarding aspects of this game. This seems to correlate to the consensus seen with students at Huntington Beach High School (HBHS) when asked about their motivation to play fantasy football.

A current junior at HBHS, Rachel Jaskowiak, says “I like to compete with my friends and feel involved with the NFL players.”

Also, playing for his fourth year in a row, Peter Tran says, “I love football and fantasy is a fun way to compete with my friends.”

Overall, fantasy football is known as a popular way to be more involved with the season and gives you the opportunity to compete with others, putting your knowledge and predictions of the football season to the test.