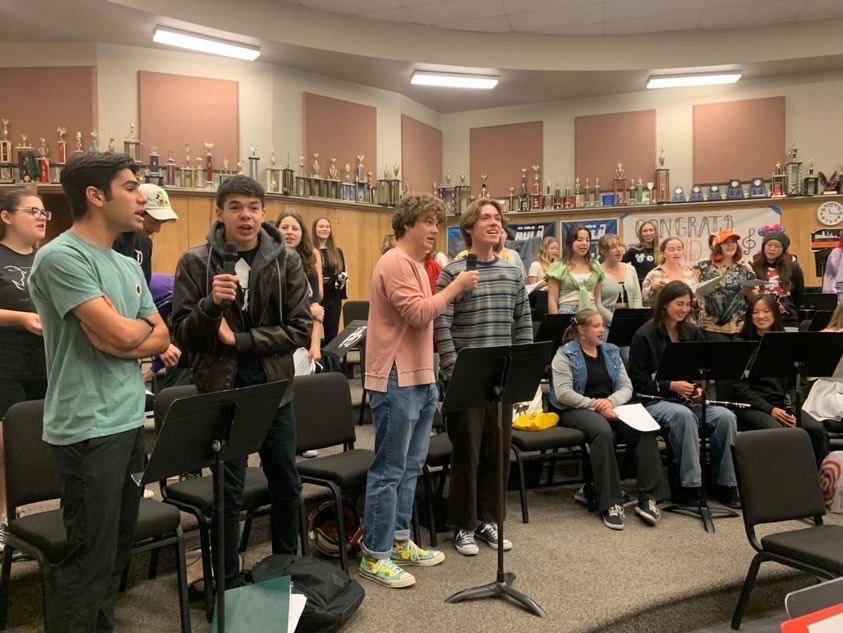 The cast of Newsies practicing a full run thorough of the show. (Photography by: Sarah Hentges) (Sarah Hentges )

The cast of Newsies practicing a full run thorough of the show. (Photography by: Sarah Hentges)

The news of the Academy for the Performing Arts (APA) performing Newsies as their fall musical has attracted controversy over the character known as “Crutchie.” The character Crutchie is considered to be disabled because he had polio as a kid, which left him with a leg that is inoperative that causes him to rely on a crutch to walk.

“There are many reasons why the character is offensive,” Cross said.

“Number one, his name is Crutchie, and having an able [bodied] person portray that character [of that] sort makes disability a mockery in theater than it should be,” Cross repeated.

“If and when they did cast able people in the role of Crutchie, it’s best to just eliminate the disability, and as much I say that representation is important, I mean accurate representation because inaccurate is worse than no representation at all.”

Others believe that the show is a production; it is just acting, and therefore it does no harm to others. When speaking to Kenny Hougue, a student who was cast in the role of Crutchie in APA’s production, said, “By all means, [I do not] want to offend anyone.”

Hougue went on to add that he “[Does not] want to make it seem like a joke character or anything.”

He also explained that the actors know that disabilities are real and that they do not want to make fun of the disabled community or anyone affected by this topic.

From the APA Administration’s perspective, Stacy Robison, APA’s Special Programs Administrator said, “We do have several people with disabilities cast in the show…we did not have anyone audition for the role of Crutchie with the same disability as the character…The roles were advertised, and we cast who came to the call.”

Robison continued, “I believe it is important to note that a disability is defined as a condition or function judged to be significantly impaired relative to the usual standard of an individual or group. The term is used to refer to individual functioning, including physical impairment, sensory impairment, cognitive impairment, intellectual impairment, mental illness, and various types of chronic disease. Some differences may be invisible…These discussions can include the autism spectrum, dyslexia, dysgraphia, and attention deficit (hyperactivity) disorder.”

The legality of the show itself was something directors had to take into consideration when putting it together.

“In order to perform a show at HB APA, we are required to pay for the Rights and Royalties of a show. This is called a Performance License. In the spring of each year, we apply for shows for the following year, and often some of our choices are turned down based on what other theaters and schools have also applied for the rights. Once we have been accepted, we then must follow the Performance License to the full extent, and any violation can lead to Musical Theater International to automatically and immediately terminate the production,” said Robison.

She went on to talk about how “The License Agreement expressly states that the show you license must be performed as written. Changing the show – including altering the music, lyrics, book, and/or switching the gender of a character or changing the period setting – is a serious violation of the author’s rights and is strictly prohibited. Unauthorized alteration of material may result in losing your performance license.”

There are controversial opinions about Newsies, whether it is that people find it offensive or people just find it acting. APA is home to many students who have disabilities, and the cast of Newsies has taken them into consideration. APA will still be putting on Newsies, while simultaneously trying to be respectful of the disabled community.