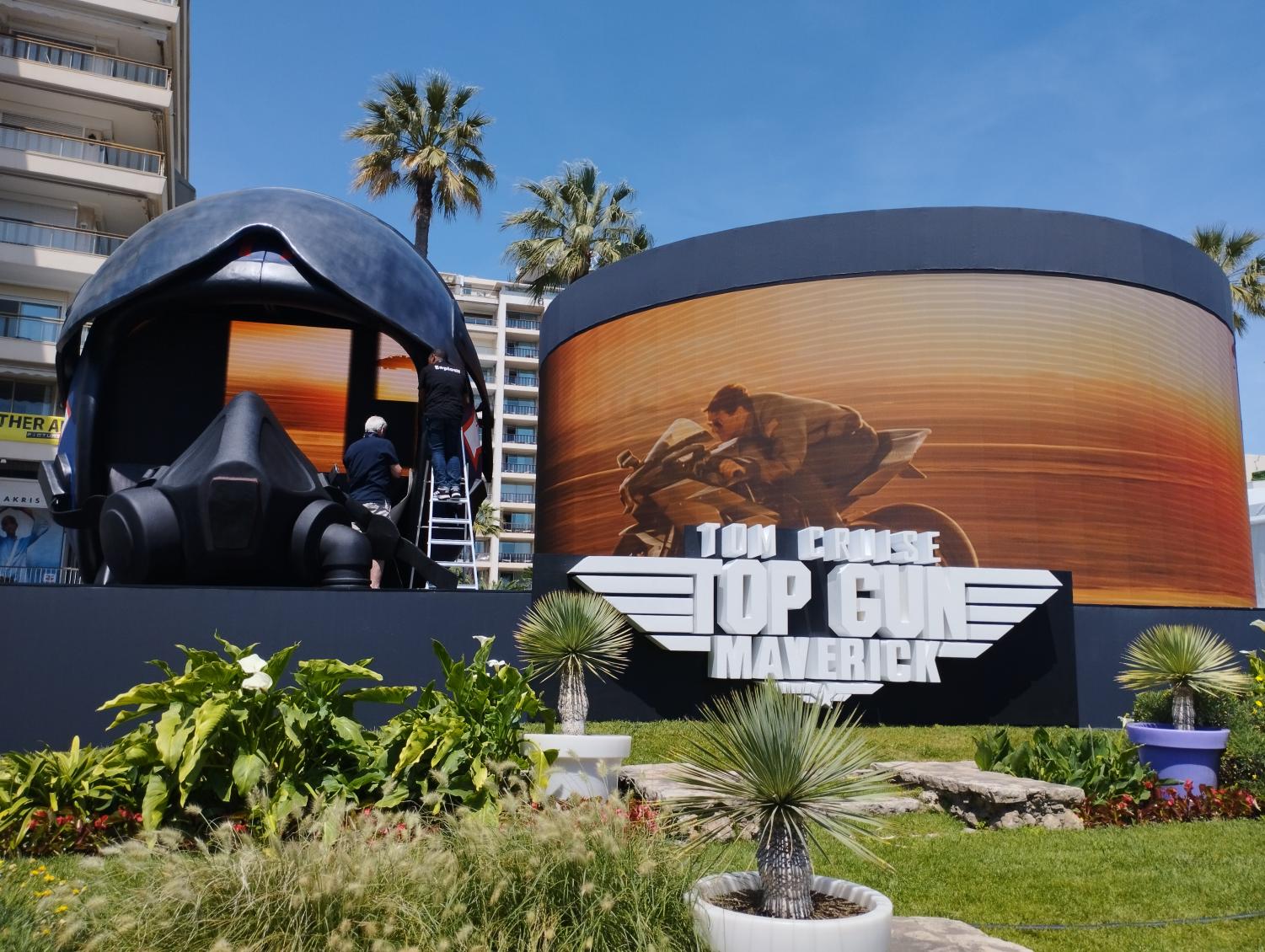 A Top Gun: Maverick display at the Cannes Film Festival 2022. (Photo by: ManoSolo13241324 Wikimedia Commons “Installation bearing the image of “Top Gun: Maverick” on the Croisette in Cannes.”) (Tobias Hodne)

A Top Gun: Maverick display at the Cannes Film Festival 2022. (Photo by: ManoSolo13241324 Wikimedia Commons “Installation bearing the image of “Top Gun: Maverick” on the Croisette in Cannes.”)

Top Gun is a story of friendship, rivalry, and romance set against the backdrop of the Cold War. The movie is full of amazing aerial footage, such as when the main characters Maverick and Goose fly upside down under a bridge. Maverick is an amazing pilot, but he’s also a bit of a rebel. He doesn’t always follow the rules, and he has a bit of a temper. But, in the end, he’s a good guy who just wants to be the best at what he does.

In Top Gun: Maverick, Maverick is still a hotshot while flying, continues to disobey direct orders, but remains a very skilled pilot. The film deserves all the profits it received, as Top Gun: Maverick had an amazing plot, warranting multiple watches. The plot has a perfect mix of build-up and tension. The movie splits into three acts, the build-up, the training, and the mission. Normally watching the training would seem boring to sit through. However, the director, Joseph Kazinski, makes every shot feel important and entertaining. The added benefit of every flight being real, instead of computer-generated images (CGI), truly benefits the film pushing it beyond amazing. Each actor faced up to 8Gs of force, or 1,600 pounds of force when flying for the movie.

Mach is the unit of speed planes fly by. Thus, the movie also starts with an amazing feat, going Mach 10. While this feat is only obtainable in the film, the Sr-7 Darkstar shows what could be possible. Currently, the highest mach force in real life is achieved at 9.6 mach, which was achieved by NASA on November 16, 2004, in the X-43A.

Throughout Top Gun: Maverick (2022), there are also many themes of forgiveness and letting go of the past. Tom Cruise and Miles Teller’s characters, Cpt. Pete “Maverick” Mithcell and Lt. Bradley “Rooster” Bradshaw, are constantly at each other’s necks. With Maverick trying to be the father that Rooster lost, it’s sad watching Rooster resent Maverick as he sees Maverick as the reason his father died. Consistently throughout the movie, Maverick just wants to make sure that Rooster is safe but almost gets Maverick killed.

Many of the scenes would not have been possible without Claudio Miranda. Miranda is a master of cinematography and Top Gun: Maverick shows his skill. Miranda has won multiple awards such as an oscar for his work on Life of Pi (2012). In an interview with FujiFilms, Miranda said “The whole thing about Top Gun is trying to get things in camera, to get people flying in the air. We wanted to be able to bank in corners and pull serious Gs on everything and just show that in the movie.”

Top Gun movies have always used real planes, such as in the first Top Gun (1986) when they had real Top Gun pilots flying and choreographing the dog fights. In the new movie, Miranda was able to put high-tech camera rigs inside the fighter jets, therefore making every scene feel more real. Tom Cruise was one of the main contributors to using real planes.

In an interview with Paramount Pictures, Miles Teller said that “Putting us up in these jets, it’s very serious. That’s why everybody thought it was impossible, and I think when Tom hears that something’s impossible, or it can’t be done that’s when he gets to work.” Tom Cruise did get to work, preparing a rigorous 3-month training regimen. Cruise created this regiment by condensing two years worth of material he wished he learned when filming for the first Top Gun in 1986.

Overall, Top Gun: Maverick (2022) had an amazing crew that helped make the movie as popular as it was. With all the love and positive feedback from fans, both the Top Gun movies are bound to see many awards in the future.